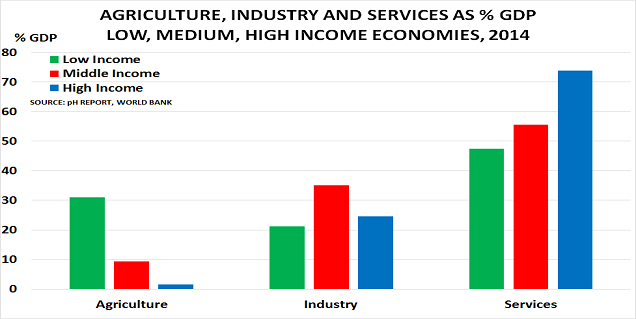 Suddenly, manufacturing and protectionism have become political issues across the Western world.  President Trump has already formed a Manufacturing Council with the aim of “reshoring jobs” from outside the USA, and is threatening to introduce import duties of up to 45%.

The problem, however, as the chart shows, is that this will not help the people who voted for him.  Manufacturing is not the key to future success for a High Income economy like the US.  Its real importance has always been as the mechanism for Low Income economies to become Middle Income:

The real problem facing the US and other developed societies is two-fold:

One is that the the wealthy developed world has moved into the fourth stage of the Demographic Transition.  As the IMF noted 10 years ago:

But this has never been explained to voters.  Western political leaders didn’t want to have difficult debates about the the key issue raised by collapsing fertility rates and increasing life expectancy – how do we retrain people in their 50s and 60s to ensure they continue to contribute to economic growth?   Instead, they preferred to hope that central bank stimulus could somehow replace the loss of babies.

Today, the voters’ patience is starting to wear out.  They see little evidence of growth returning to the earlier SuperCycle levels, when most of the population were in the Wealth Creation 25 – 54 generation.  And so they are looking for new leaders, who will do a better job of protecting their living standards. 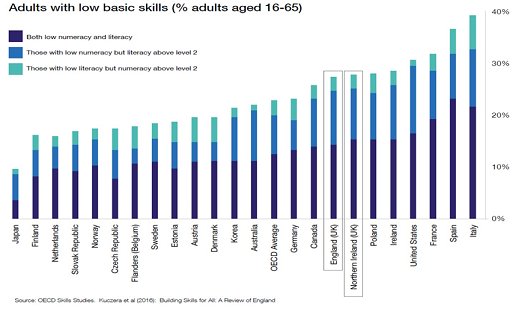 This is where the second problem becomes critical.  Unfortunately, Western education systems have not provided every voter with the Basic Skills they need to work successfully in a Services-based economy, as the second chart (from the new UK government Industrial strategy) highlights:

It is therefore no great surprise that large numbers of adults, who have not voted regularly in previous elections, are now becoming more active.  Populist policies have an obvious attraction for them, as they feel their country is heading in the wrong direction. 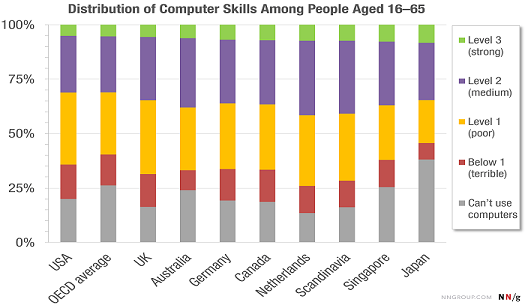 The third chart highlights an even more serious side of this issue, namely the very low levels of computer skills across the OECD.  These are critical for an increasing number of jobs, but the OECD reported last year that nearly three-quarters of adults have poor (or lower levels) of computer skills.  As they also noted:

“There is a strong positive relationship between problem-solving proficiency (in technology-related areas) on the one hand and literacy, and numeracy proficiency on the other.”

Education policy is not something that can be changed overnight.  It will take years, if not decades, to replace today’s failing systems and to provide adults with the Basic Skills they have been denied.

Protectionism, on the other hand, appears to offer almost immediate prospect of change.  Only later will it become apparent that its main role has been to turn back the clock on incomes and the economy.