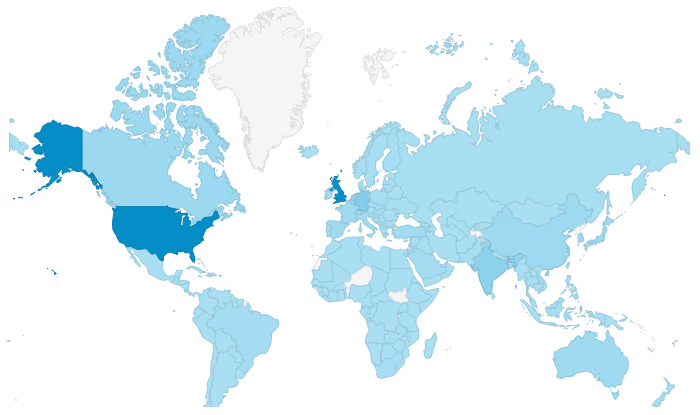 2016 saw the Great Reckoning for the failure of stimulus policies begin to impact companies and markets.

The blog’s readership has increased significantly as a a result, as shown in the chart above, with its visits now totaling nearly 500k.  Its readership includes 197 countries and over 11k cities.  Readers also remain very loyal, with one in two reading it every week, and one in four reading it every day.

The key issue is that consensus wisdom has clearly failed – once again – to provide a reliable guide to the outlook. By contrast, the blog was one of the first to explore the attractions of Populist policies, and to suggest that the UK government would lose the Brexit vote, and that Donald Trump would likely become President.

Even today, however, most “expert commentary” continues to ignore these developments, and the later Italian referendum, and instead believes we will see “business as usual” in 2017.  Yet developments in the world’s 2 most important economies, the USA and China, suggest that in reality, this is the least likely option:

“Imposing steep tariffs on China was an essential step to begin to address the American trade deficit with China, which reached $365bn last year. He blamed Chinese trade practices for “destroying entire industries, hollowing out entire communities” and “putting millions out of work.”  His colleague, Prof Greg Auty added:

“The Trump camp was dead serious about its threats to impose tariffs on China. The goal is to force manufacturers to come back to the United States as a condition of selling into the American market.  A full-on trade war between the world’s two largest economies would cost American jobs in the immediate term, but eventually millions of new ones would be created as the United States again hummed with factory work.

“We moved our supply chain to Asia in about two decades,” he said. “You certainly can do it in the U.S. a whole lot faster. It’s going to take a few years, but it’s going to be a much better America.” (my emphasis)

In China, as Xinhua reports, bursting the property bubble has become the key target of government policy:

“President Xi Jinping highlighted curbing property bubbles at a meeting of the Central Leading Group on Finance and Economic Affairs on Wednesday, the fourth time asset bubbles were mentioned by Chinese leaders in the second half of the year.

“China will take a varied approach to regulating the property market, adopting financial, fiscal, tax, land and regulation measures to build a long-term housing mechanism that provides housing for all people, according to Xi.  Thanks to policies introduced by local authorities in October, the property market in big cities continued to stabilize in the last month, gradually retreating from sky-high prices.

“Houses are built for living, not for speculation,” policymakers have agreed.”

In addition, of course, a number of major challenges exist in other parts of the global economy:

  The recent Italian referendum means the collapse of the Eurozone has become a real possibility
  The future of the European Union itself is also under threat given the Brexit votes and upcoming elections in The Netherlands, France and Germany
  Oil markets will likely see further volatility as the inevitable cracks appear in the recent OPEC output cuts deal
  India’s currency reforms pose a further threat to the outlook for the world’s 6th largest economy, as premier Modi’s 50-day deadline for resolving all the problems ends today

I will do my best to follow these and other critical developments in 2017.  Thank you for your continued support.