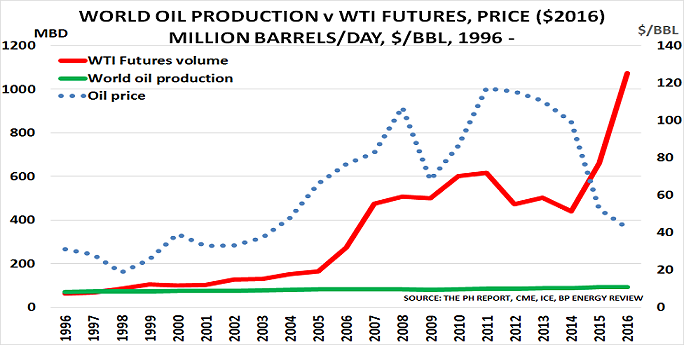 There were only two winners from the past 3 months of OPEC’s “Will they?, Won’t they?” debate on output cutbacks.

Iran wasn’t one of them – although the talks did emphasise its renewed ability to control the OPEC agenda.  Nor was Saudi Arabia, forced to accept the lion’s share of the proposed cutbacks.

Instead, the US shale producers were big winners, with some saying they were “dancing in the streets of Houston” when the “deal” was announced last week.  Who can blame them, given that production costs according to Pioneer now range between $2.15/bbl – $12.27/bbl in the vast Permian Basin field.

But the really big winners were the owners of the futures markets.  As the head of the NYMEX commodities business boasted – “the OPEC talks have been great for our business“.  Looking at the data, one can see what he means:

And, of course, last week was no exception in highlighting the dominance of the futures market is setting oil prices.  As the chart above shows, their trading volume has rocketed since the central banks began their stimulus programmes.  It averages nearly 12x physical volume so far this year, versus just 3x in 2006 – and just 1x in 1996.

As one observer rightly noted, the trading had all the signs of a buying frenzy.  For in the real world, it is highly unlikely that the production agreement will achieve its promised goals:

  Russia has never, ever, participated in an OPEC quota, and is very unlikely to actually cut production this time
  Equally important is that OPEC production itself is likely to rise as Nigerian and Libyan output continues to recover
  And, of course, oil inventories are already at record levels, and will likely rise further as production increases in the USA, Brazil, Canada and Kazakhstan

Unsurprisingly, most of the selling was being done by producers, delighted at being able to hedge their output into 2019.  They sold so much, the forward curve moved from being in contango (where tomorrow’s price is higher than today’s), to backwardation (where tomorrow’s price is lower than today’s).  This confirms that analyst talk of shortages and cutbacks is pure wishful thinking.

Even more worrying for the oil bulls is that the rise in the US$ is also reducing demand in the major Emerging Markets.  Oil is priced in US$, and this has risen by 10% or more against many currencies in the past few months.  And any recession in 2017, which seems likely based on the chemical industry outlook, will further weaken demand. 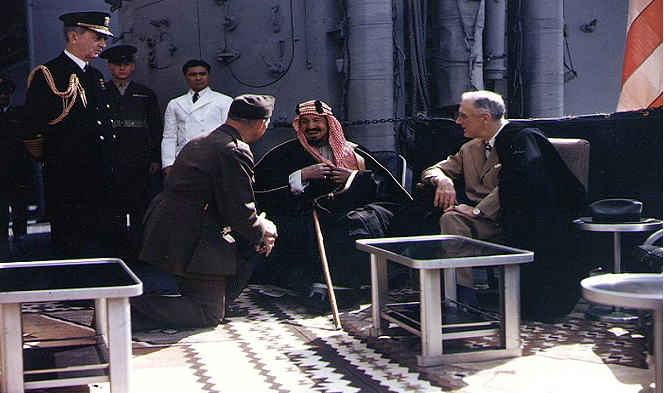 But the OPEC meeting did highlight one critical development.  For the first time since the 1980s, Saudi Arabia sided with OPEC in terms of agreeing cutbacks.  This has only happened twice before in history – during the 1973/4 Arab Oil Boycott, and the 1979/85 Oil Crisis.

Both times, Saudi was worried that its critical Oil-for-Defence deal with the USA might not deliver promised support:

  In 1973, President Nixon was facing impeachment over the Watergate scandal, and the Arab world was up in arms over US support for Israel in the Yom Kippur War
  In 1979, President Carter was facing defeat in his re-election bid, and the Iran hostage issue meant US support again became unreliable

Today, the 1945 pact between President Roosevelt and King Saud (pictured above) is effectively dead.  President-elect Trump no longer sees the USA as the “leader of the free world”, and it is most unlikely that he would send military support to Saudi if it was attacked. The fact that the US is now on the way to becoming energy self-sufficient by 2021 means it has no real need for Saudi oil any more, as I suggested 2 years ago:

  ”Suddenly the Saudis face a critical question – does the US still need the 1.3 million barrels/day they supplied in 2013?
  And if not, will the US still be prepared to defend Saudi from attack, as it did during the first Gulf War in 1990-1991?
  This is the question that keeps senior Saudi officials and Ministers awake at nights in Riyadh”

This the New Normal world in action.  Old certainties are disappearing, and we do not yet know what will replace them.