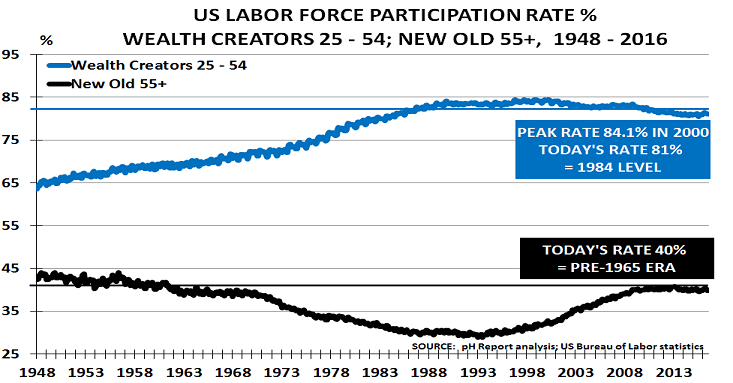 There was one bit of good news this week.  For the first time since the financial crisis began, a Governor of the US Federal Reserve acknowledged that today’s demographic changes are having a major impact on the US economy. John Williams, of the San Francisco Fed, argued that:

“Shifting demographics….(mean that) interest rates are going to stay lower that we’ve come to expect in the past…In this new normal, recessions will tend to be longer and deeper, recoveries slower, and the risks of unacceptably low inflation and the ultimate loss of the nominal anchor will be higher…We’ve come to the point on the path where central banks must share responsibilities. There are limits to what monetary policy can and, indeed, should do. The burden must also fall on fiscal and other policies to do their part to help create conditions conducive to economic stability.”

Williams thus confirmed our conclusion from 5 years ago in chapter 2 of Boom, Gloom and the New Normal:

“The Boomers have moved on from being a high-spending generation. Instead, they are becoming a high-saving generation, as they need to save more to survive a longer retirement. And therefore the failure of the various government stimulus programmes since the crisis began should be no surprise. The concept of pent-up demand is now wishful thinking.

“The key issue is that we need a change in mindset. Those companies who continue to expect stimulus measures to deliver a return to the Golden Age are likely to be disappointed. Instead, the winners will focus on understanding how to profit from the demographic changes now underway, as we transition to the New Normal.”

It is good news that one leading central banker now accepts that stimulus policies cannot return the economy to SuperCycle levels.  The chart above, showing the labour market participation rates for the US Wealth Creator 25 – 54, and New Old 55+, cohorts, highlights two core issues:

□  Fewer Wealth Creators are working today than in 2000, when the oldest BabyBoomer was about to become 55
□  The US has also done very badly at keeping the New Olders in the work force – their participation rate today at 40% is half that of the Wealth Creators, and is lower than in the pre-1965 era

It is really no surprise that the US economy is struggling, given these figures.

One of the key problems is that current US Social Security rules penalise people who want to work, but need to take their benefits early.  This matters, as 10k Boomers are retiring every day until 2030.  Only around 2% of these retirees can afford to wait until the age of 70 to take their benefits – even though this would increase their benefits by an astonishing 76% versus taking them at 62:

Company pensions themselves are another issue that Congress needs to tackle urgently.  As the second chart from Bloomberg notes

□  Pension plans in S&P 500 companies are currently in deficit by $500bn
□  Congress actually made the situation worse in 2012 by allowing companies to value their pension liabilities by using a “smoothed” discount rate based on average interest rates over the past 25 years
□  This makes no sense, in the light of John Williams’ conclusion that “interest rates are going to stay lower than we have come to expect in the past“.
□  The reason, of course, was that Congress wanted to join the Fed in supporting financial markets by prioritising share buybacks and boosting stock prices.  Thus since 2012, many companies haven’t had to fund their pensions plans – and on average, those with large plans have been able to cut their contributions by half

THE NEW CONGRESS WILL HAVE TO FOCUS ON SUPPORTING RETIREMENT INCOME
So here’s the nub of the issue.  The Fed, like other major central banks, is close to admitting that its monetary experiments have failed to produce the expected results.  The next Administration will therefore be faced with a need to unwind many of the policies put in place since the financial crisis began 8 years ago.

3 key issues will therefore confront the next President.  He or she:

□   Will have to design measures to support older Boomers to stay in the workforce
□   Must reverse the decline that has taken place in corporate funding for pensions
□   Must also tackle looming deficits in Social Security and Medicare, as benefits will otherwise be cut by 29% in 2030

It has always been obvious that the Fed could not possibly control the economic fortunes of 321m Americans. Common sense tells us that demographics, not monetary policy, drive demand.  Unfortunately, vast amounts of time and money have been wasted as a result.  The path back to fiscal sanity will be very hard indeed.