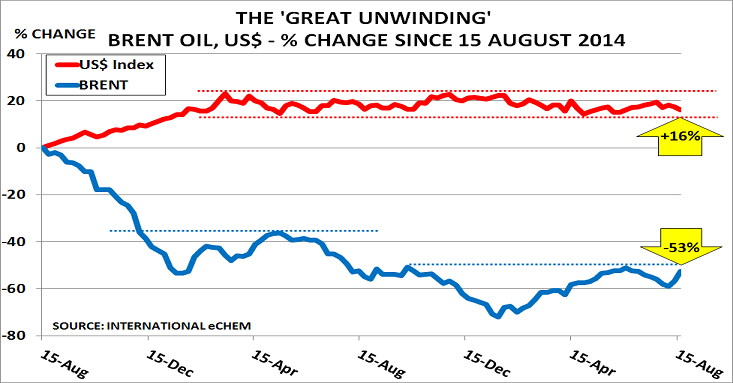 “There is a distinct difference between “suspense” and “surprise.”  Alfred Hitchcock

These are astonishing moves, given that they were more or less totally unexpected by consensus thinking.  What is even more astonishing is that they have not yet prompted any major changes in consensus assumptions about the outlook for the global economy.

“Yet”, of course, is the operative word.  As the great film director Alfred Hitchcock explained:

“We are now having a very innocent little chat. Let’s suppose that there is a bomb underneath this table between us. Nothing happens, and then all of a sudden, “Boom!” There is an explosion. The public is surprised, but prior to this surprise, it has seen an absolutely ordinary scene, of no special consequence.

“Now, let us take a suspense situation. The bomb is underneath the table and the public knows it, probably because they have seen the anarchist place it there. The public is aware the bomb is going to explode at one o’clock and there is a clock in the decor. The public can see that it is a quarter to one. In these conditions, the same innocuous conversation becomes fascinating because the public is participating in the scene. The audience is longing to warn the characters on the screen: “You shouldn’t be talking about such trivial matters. There is a bomb beneath you and it is about to explode!”

“In the first case we have given the public fifteen seconds of surprise at the moment of the explosion. In the second we have provided them with fifteen minutes of suspense.”

This exactly describes the state of financial markets today.  Some people have seen the bomb being placed under the table – not by the anarchist, but the the central banks.  It is the debt they have created, that can never been repaid.

But consensus thinking is still chatting idly away, convinced that markets are in an absolutely ordinary state.   When the debt bomb explodes, they will claim to be surprised – just as they claimed after 2008 that “nobody could have seen the financial crisis coming“.

The rest of us remain in a state of suspense.  We know the bomb will explode, even though – unlike in Hitchcock’s movie – there is no clock visibly ticking away to tell us exactly when this will take place.  What we do know, however – after 2 years of the Great Unwinding – is that the Great Reckoning is coming close:

□  Until now, we have merely seen the unwinding of policymakers’ ability to hijack markets in their desired direction
□  Today, however, markets are rediscovering their core role of price discovery, based on supply/demand fundamentals
□  The rise in oil market volatility is one clear sign of this – one moment, traders worry about new liquidity from the central banks; next, they worry about where to store all the surplus oil and gasoline that is being produced

Today, on the second anniversary of the Great Unwinding, the focus is now moving to the next scene, the Great Reckoning.  That is the moment when people no longer worry about anticipating the impact of stimulus policies on financial markets.  Instead, they will worry, once again, about real world issues.

Suspense is therefore rising for those of us who have seen this movie before in 2008.  But for everyone else, life simply appears to be going on as normal.

WEEKLY MARKET ROUND-UP
My weekly round-up of Benchmark prices since the Great Unwinding began is below, with ICIS pricing comments:
Brent crude oil, down 53%
Naphtha Europe, down 54%. “A few European refiners are beginning to cut back on crude processing because of the lower margins”
Benzene Europe, down 49%. “Strong downstream demand in Asia has also pushed benzene prices in the region higher”
PTA China, down 41%. “Market expected to remain bearish until mid-September”
HDPE US export, down 27%. “Subdued buying appetite at the high-end prices weighed on prices”
S&P 500 stock market index, up 12%
US$ Index, up 16%