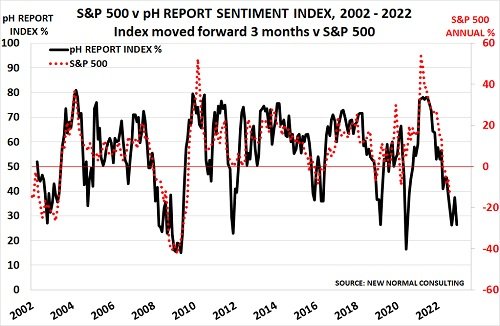 Our Sentiment Index has proved a reliable guide since its December launch. Most commentators then expected another year of strong performance in 2022. But the Index was rightly more cautious, as the chart confirms.

The Index typically gives a 3-month warning of future S&P movements. Thus it also forecast the recent rally in July/August. And it has correctly anticipated today’s further downturn.

The size and speed of the downturn is not a great surprise.

The surprise is really that central banks were allowed to spend the past 20 years effectively destroying price discovery in financial markets:

As Fed chairman, Ben Bernanke, described its purpose in 2010:

Now we are starting to see the downside of this process as markets rediscover their key role of price discovery.  Unfortunately, this is unlikely to be quick or painless, as the asset bubbles created by central bank stimulus start to burst. 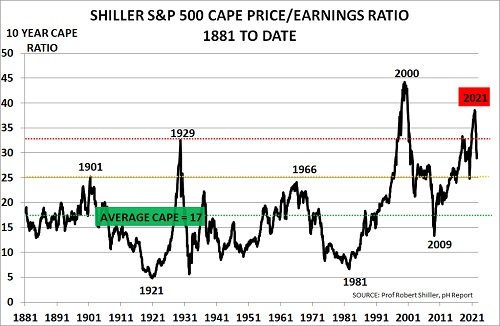 This assessment is confirmed by the long-term outlook provided by Nobel Prizewinner Prof Robert Shiller’s CAPE ratio. It is based on the average 10-year Cyclically Adjusted Price/Earnings ratio as the chart shows:

This also suggests there is major downside, if the ratio now starts to return to its long-term averages: 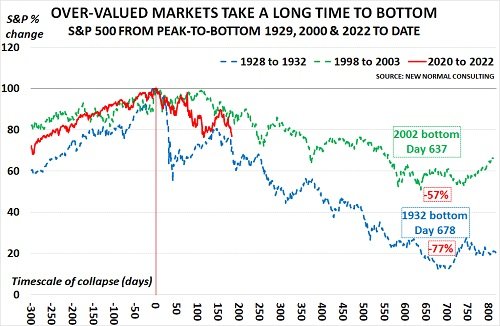 This difference is significant if one wants to use CAPE history to consider possible end-points for the downturn, as the chart shows:

We can also now start to estimate the S&P’s possible final bottom if the parallels continue:

Most commentators chose to ignore the warnings on inflation and recession provided by chemical industry data. As a result, they have been blindsided by the speed and scale of the S&P 500’s downturn. But the Sentiment Index has proved far more reliable.