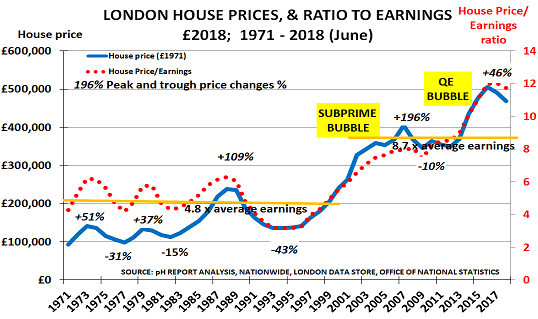 London house prices are “falling at the fastest rate in almost a decade” according to major property lender, Nationwide.  And almost 40% of new-build sales were to bulk buyers at discounts of up to 30%, according of researchers, Molior.  As the CEO of builders Crest Nicholson told the Financial Times:

“We did this sale because we knew we would otherwise have unsold built stock.”

They probably made a wise decision to take their profit and sell now.  There are currently 68,000 units under construction in London, and nearly half of them are unsold.  Slower moving builders will likely find themselves having to take losses in order to find a buyer.

London is a series of villages and the issues are different across the city:

West End, Central London.  This is the top end of the market, and was one of the first areas to see a decline.  As buying agent Henry Pryor notes:

“Very few people want to buy or sell property in the few months leading up to our monumental political divorce from Europe next March, which is why 50% of homes on the market in Belgravia and Mayfair have been on the market for over a year. Yet there are people who have to sell, whether it be because of divorce, debt or death, so if you have money to spend I can’t remember a time since the credit crunch in 2007 when you could get a better deal.”

NW London.  Foreign buyers flooded into this area as financial services boomed.  Rising bonuses meant many didn’t need a mortgage and could afford to pay £1m – £2.5m in cash.  But now, many banks are activating contingency plans to move some of their highly paid staff out of London ahead of Brexit.  Thus Pryor reports buying a property recently for £1.7m, which had been on the market for £2.25m just 2 years ago.

W London.  Also popular with foreign buyers, even areas such as Kew (with its world-famous Royal Botanic Gardens) have seen a dramatic sales volume decline.  In Kew itself, volume is down 40% over the past 2 years.  And, of course, volume always leads prices – up or down.  Over half of the homes now on sale have cut prices by at least 5% – 10%, and the pace of decline seems to be rising.  One home has cut its offer price by 17.5% since March.

Outer London.  This is the one area bucking the trend, due to the support provided by the government’s ‘Help to Buy’ programme.  This provides state-backed loans for up to £600k with a deposit of just 5%.  As Molior comment, this is “the only game in town” for individual purchasers, given that prices in central London are out of reach for new buyers. 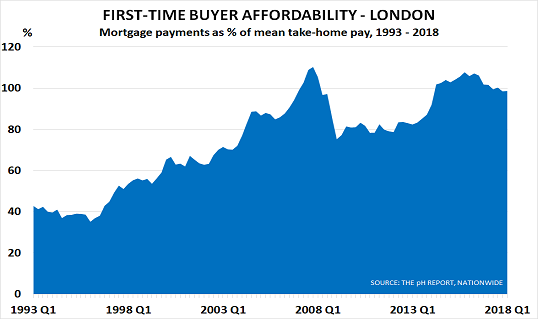 The key issue is highlighted in the charts above – affordability:

The paradigm shift was driven by policy changes after the 2000 dot-com crash.  As in the USA, the Bank of England decided to support house prices via lower interest rates to avoid a downturn, and then doubled down on the policy after the financial crash – despite the Governor’s warning in 2007 that:

“We knew that we had pushed consumption up to levels that could not possibly be sustained in the medium and longer term. But for the time being if we had not done that the UK economy would have gone into recession… That pushed up house prices and increased household debt. That problem has been a legacy to my successors; they have to sort it out.”

But now all these factors are unraveling, leaving prices to be set by local supply/demand factors again.  Recent governments have taken away the tax incentives behind buy-to-let, and have raised taxes for foreign buyers.  As the top chart shows, this leave prices looking very exposed:

And, of course, there is the issue of exchange rates.  Older house-owners will remember that the Bank of England would regularly have to raise interest rates to protect the value of the pound.  In 1992, they rose to 15% at the height of the ERM crisis.  But policy since then has been entirely in the other direction.

Nobody knows whether what will happen next to the value of the pound.  But if interest rates do become more volatile again, as in 1971-2000, cyclicality might also return to the London housing market.