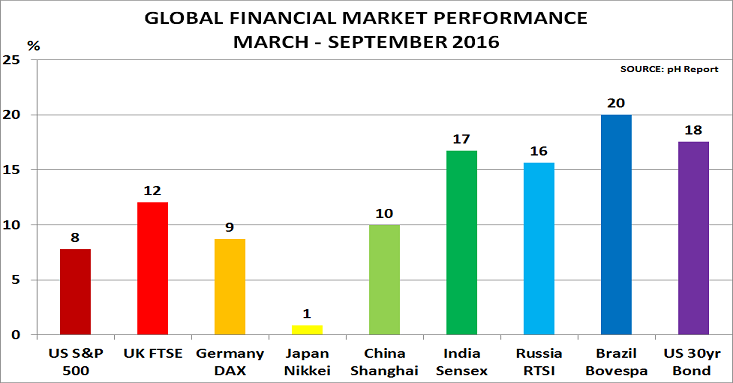 Its been a great few months for financial markets.  All the major markets have seen gains, as the chart shows – something that has happened only once before, since my half-yearly reviews began in March 2009: 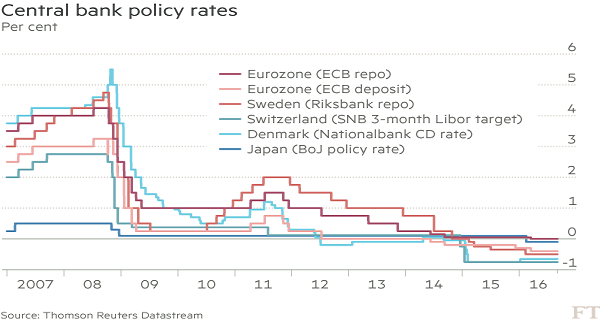 The key to the move is shown in the second chart from the Financial Times, which highlights the number of central banks who are now experimenting with negative interest rates  – Denmark, the Eurozone, Switzerland, Sweden and Japan.  Pension funds and other investors need to earn a positive return in order to meet their obligations, so there has been a frantic “search for yield”.

They have therefore rushed to buy long-dated bonds, and stock in the EMs (where yield was highest) as well as in developed markets.  As Lord Rothschild, current head of the famous banking dynasty, has warned in his latest report:

“The six months under review have seen central bankers continuing what is surely the greatest experiment in monetary policy in the history of the world. We are therefore in uncharted waters and it is impossible to predict the unintended consequences of very low interest rates, with some 30% of global government debt at negative yields, combined with quantitative easing on a massive scale.

“The geo-political situation has deteriorated with the UK having voted to leave the European Union, the presidential election in the US in November is likely to be unusually fraught, while the situation in China remains opaque and the slowing down of economic growth will surely lead to problems. Conflict in the Middle East continues and is unlikely to be resolved for many years.”

These two factors are, of course, linked as I discussed on Monday.

What is particularly worrying, from a markets perspective, is the collapse of volatility.  The benchmark S&P 500 Index, for example, has swung between 2157 – 2194 over the past 4 weeks, a range of just 1.7%, as investors have become complacent over risk – believing central banks will never, ever, let financial markets fall. As market analysts OTAS note, this is creating the same behavior patterns that we saw before the subprime disaster:

“Sustained periods of low volatility correlate well with steadily rising equity prices. Yet concern is mounting that the current low volatility is storing up future problems, because investors are doubling up on high share prices. By selling put options on shares and indices, thereby committing themselves to buy shares should the prices fall, these funds are exposed to an equity market sell-off through both their ownership of stock and the recently written put options.

It is perfectly rationale to sell puts if you believe that markets are rising. The concern however, is that funds are so starved of yield that they are writing puts for the short-term income benefit and relying on the world’s central banks to bail them out should stock markets take a dive. A parallel is drawn with the sub-prime mortgage debacle, when it was not the size of the market for poorly underwritten mortgage loans that triggered the financial crisis, but the vast number of derivatives layered on top that magnified risk throughout the financial system.”

The dilemma this creates for investors and companies is well summarised in Robert Frost’s famous poem, “The road not taken”:

Two roads diverged in a wood, and
I took the one less travelled by,
And that has made all the difference

Of course, central bank policies might finally be seen to work and deliver the promised economic recovery.  And it is certainly hard for any investor to go against the consensus, and effectively give up on the prospect of seemingly risk-free gains, by refusing to join in the “search for yield”.

But as another famous writer, Ernest Hemingway noted in “The Sun also Rises”, bankruptcy happens in “Two ways. Gradually, and then suddenly“.