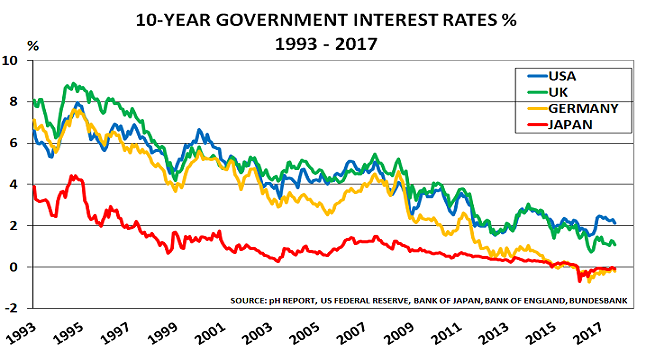 Global interest rates have fallen dramatically over the past 25 years, as the chart shows for government 10-year bonds:

But what goes down can also rise again.  And one of the most reliable ways of investing is to assume that prices will normally revert to their mean, or average.

If this happens, rates have a long way to rise.  Long-term UK interest rates since 1703 have averaged 4.5% through wars, booms and depressions.  If we just look more recently, average UK 10-year rates over the past 25 years were 4.6%.  We are clearly a very long way away from these levels today.

This doesn’t of course mean that rates will suddenly return to these levels overnight.  But there are now clear warning signs that rates are likely to rise as central banks wind down their Quantitative Easing (QE) and Zero Interest Rate stimulus policies.  The problem is the legacy these policies leave behind, as the Financial Times noted recently:

“In total, the six central banks that have embarked on quantitative easing over the past decade — the US Federal Reserve, the European Central Bank, the Bank of Japan and the Bank of England, along with the Swiss and Swedish central banks — now hold more than $15tn of assets, according to analysis by the FT of IMF and central bank figures, more than four times the pre-crisis level.

“Of this, more than $9tn is government bonds — one dollar in every five of the $46tn total outstanding debt owed by their governments.  The ECB’s total balance sheet recently topped that of the Fed in dollar terms. It now holds $4.9tn of assets, including nearly $2tn in eurozone government bonds.”

The key question is therefore ‘what happens next’?  Will pension funds and other buyers step in to buy the same amount of bonds at the same price each month?

The answer is almost certainly no.  Pension funds are focused on paying pensions, not on supporting the national economy.  And higher rates would really help them to reduce their current deficits.  The current funding level for the top US S&P 1500 companies is just 82%, versus 97% in 2011.  They really need bond prices to fall (bond prices move inversely to yields), and rates to rise back towards their average, in order to reduce their liabilities.

The problem is that rising yields would also pressure share prices both directly and indirectly:

  Some central banks have been major buyers of shares via Exchange Traded Funds (ETFs) – the Bank of Japan now owns 71% of all shares in Japan-listed ETFs
  Lower interest rates also helped to support share prices indirectly, as investors were able to borrow more cheaply

Margin debt on the New York Stock Exchange (money borrowed to invest in shares) is now at an all time high in $2017. Ominously, company buy-backs of their shares have already begun to slow and are down $100bn in the past year. 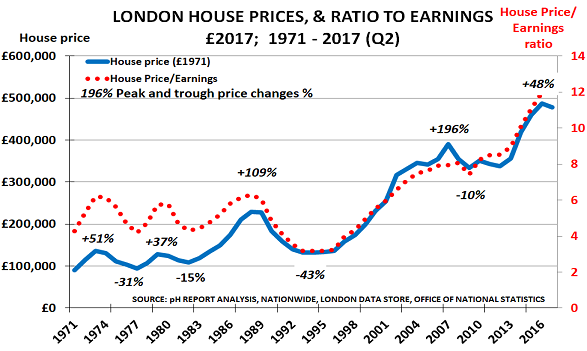 House prices are also in the line of fire, as the second chart shows for London.  They have typically traded on the basis of their ratio to earnings

The reason was that after the dotcom crash in 2000, the Bank of England deliberately allowed prices to move out of line with earnings. As its Governor, Eddie George, later told the UK Parliament in March 2007:

“When we were in an environment of global economic weakness at the beginning of the decade, it meant that external demand was declining… One had only two alternatives in sustaining demand and keeping the economy moving forward: one was public spending and the other was consumption….

“We knew that we had pushed consumption up to levels that could not possibly be sustained in the medium and longer term. But for the time being if we had not done that the UK economy would have gone into recession, just like the economies of the United States, Germany and other major industrial countries. That pushed up house prices and increased household debt. That problem has been a legacy to my successors; they have to sort it out.”

Of course, as the chart shows, George’s successors did the very opposite. Ignoring the fact that a bubble was already underway, they instead reduced interest rates to near-zero after the subprime crisis of 2008, and flooded the market with liquidity. Naturally enough, prices then took off into the stratosphere.

Today, however, the Bank is finally recognising – too late – that it has created a bubble of historical proportions, and is desperately trying to shift the blame to someone else.  Thus Governor Mark Carney warned last week:

“What we’re worried about is a pocket of risk – a risk in consumer debt, credit card debt, debt for cars, personal loans.”

Of course, the biggest “pocket of risk” is in the housing market:

  Lower interest rates meant lower monthly mortgage payments, creating the illusion that high prices were affordable
  But higher prices still have to be paid back at the end of the mortgage – very difficult, when wages aren’t also rising

The Bank has therefore now imposed major new restrictions on lenders.  They have ordered them to keep new loans at no more than 4.5x incomes for the vast majority of their borrowers.  And lenders themselves are also starting to get worried as the average deposit is now close to £100k ($135k).

Of course, London prices might stay high despite these new restrictions.  Anything is possible.

But fears over a hard Brexit have already led many banks, insurance companies and lawyers to start moving highly-paid people out of London, as the City risks losing its “passport” to service EU27 clients.  Over 50% of surveyors report that London house prices are now falling, just as a glut of new homes comes to market.  In the past month, asking prices have fallen by £300k in Kensington/Chelsea, and by £75k in Camden, as buyers disappear.

The next question is how low could prices go if they return to the mean?  If London price/earning ratios fell back from today’s 12x ratio to the post-2000 average of 8.2x level, average prices would fall by nearly a third to £332k.  If ratios returned to the pre-2000 level of 4.8x earnings, then prices would fall by 60% to £195k.

Most Britons now expect a price crash within 5 years, and a quarter expect it by 2019.  Brexit uncertainty, record high prices and vast overs-supply of new properties could be a toxic combination, perhaps even taking ratios below their average for a while – as happened in the early 1990s slump.  As then, a crash might also take years to unwind, making life very difficult even for those who did not purchase when prices were at their peak.