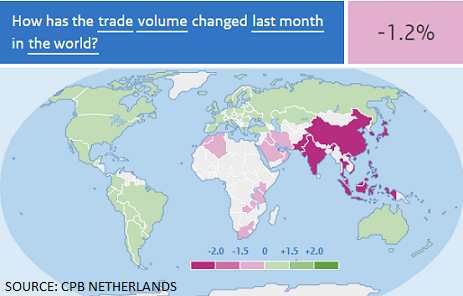 More people left poverty in the past 70 years than in the whole of history, thanks to the BabyBoomer-led economic SuperCycle.  World Bank and OECD data show that less than 10% of the world’s population now live below the extreme poverty line of $1.90/day, compared to 55% in 1950.

Globalisation has been a key element in enabling this progress, as countries and regions began to trade with each other.  But now global trade is starting to decline, as the chart from the authoritative Dutch World Trade Monitor shows:

And then on Friday, President Trump confirmed the opening of his long-planned trade wars:

PRESIDENT TRUMP IS IMPLEMENTING THE POLICIES ON WHICH HE WAS ELECTED 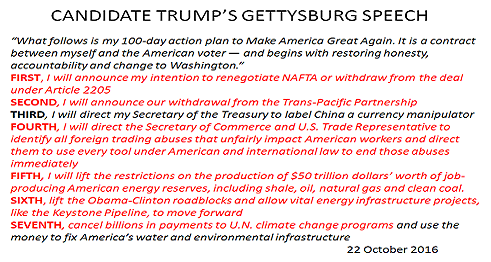 None of this should have been a surprise, as it simply follows the agenda that President Trump set out in his Gettysburg speech just before the election.  His policy proposals then, which I featured here in depth in January 2017, were crystal clear about his objectives, as the slide shows:

It was clear then, and is even clearer today, that Trump intends to abandon the policies followed by all post-War Republican and Democratic presidents including Eisenhower, Reagan and Clinton, and summarised in President Kennedy’s 1961 Inauguration Speech:

As I noted after Trump’s own Inauguration Speech in January last year, he broke very explicitly with these policies:

BAD NEWS HAS ALWAYS LED TO MORE STIMULUS IN THE PAST

Unsurprisingly, financial markets have chosen to ignore this rise in protectionism.  For them, bad news is always good news, as they expect the central banks to provide more stimulus via their money-printing policies.  As the left-hand chart shows of Prof Robert Shiller’s CAPE Index (Cyclically Adjusted Price/Earnings ratio) since 1881:

The right-hand chart confirms the bubble nature of the rally:

FINANCIAL MARKETS HAVE AN UNPLEASANT “SURPRISE” AHEAD AS CHINA SLOWS
It is therefore no great surprise that financial markets have continued to ignore developments in the real world.

Yet a decline in world trade, and the rise in protectionism, will inevitably produce Winners and Losers.  This will be quite different from the SuperCycle, when the rise of globalisation created “win-win opportunities” for countries and regions:

History also suggests President Trump will be proved wrong with his March suggestion that:  “Trade wars are good and easy to win”.  Like all wars, they are easy to start and increasingly difficult to end.

So far, financial markets have ignored these uncomfortable facts.  They still believe that any bad news will lead to even more central bank stimulus, and a further rise in margin debt.

But as I noted last week, China – not the Fed – was in fact the major source of stimulus lending.  Now its lending bubble is history, the party in financial markets is inevitably entering its end-game.