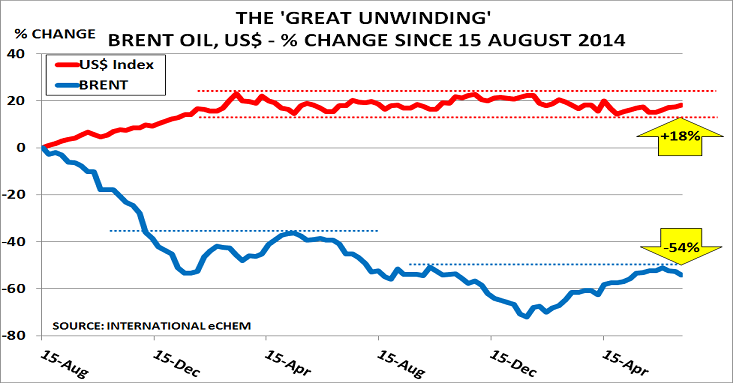 We are approaching the 2nd anniversary of the Great Unwinding of policymaker stimulus, which began in August 2014:

The oil price movements highlight how markets will often not move in straight lines:

The key factor, as I learnt when trading in oil and product markets in Houston, Texas for ICI is that “the trend is your friend“.  Traders will delight in short-term volatility, and try to catch the various up and down movements.  Genuine investors will ignore these and instead  focus on the long-term trend.  For them, the Great Unwinding concept has been very helpful in understanding the outlook for oil and the US$ – the 2 key components of the Unwinding.

Another useful guide over the past 2 years has been the concept of “higher lows and lower highs“, which helps to highlight major turning points, as the dotted trend lines illustrate: 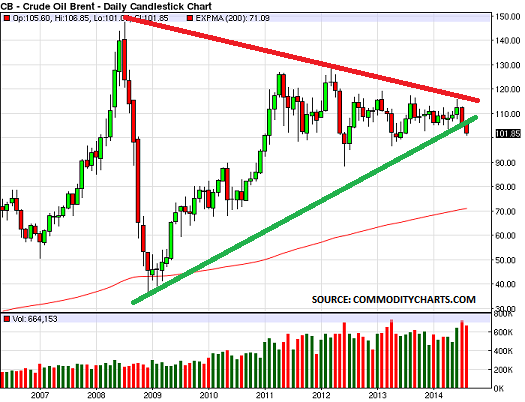 This pattern of “technical trading” is, course, exactly what guided us during the previous oil market rally from 2009 – August 2014.  Readers will remember the above chart from 21 August 2014.  Its value was that it enabled us to map the battle between the financial players and the fundamentals of supply/demand, as I noted then:

“Thus the oil price is finally starting to fall out of its triangle:

“The result, as the IEA note, is that we suddenly find we face a supply glut.

“So the chart is telling us that the financial players are now retreating from the market. In turn, this means physical supply/demand levels will come to drive the process of price discovery once again.”

There was never any real logic behind the story that the US drilling rig decline would lead to lower oil production, or that an OPEC/Russia production freeze would cause markets to rebalance.  But in today’s world of high-frequency trading, driven by algorithms, most traders focus on making a quick profit rather than logic.  Many senior oil company executives are also happy to talk the market up, hoping this will boost their company’s share price.

But today, we seem to have once again reached the fork in the road, with massive oil surpluses now emerging.  As Reuters noted on Friday:

“The levels of diesel, gasoline and heating oil in storage tanks in Europe this week are so high they are causing delivery backlogs and are casting doubt on whether demand for oil to be refined can be sustained….storage tanks for diesel and heating oil are already so full in Germany, Europe’s largest diesel consumer, that barges looking to discharge their oil product cargoes along the Rhine are being delayed, sources told Reuters….

“The sheer volume of gasoline in the system, despite surging demand, has more than halved gasoline refining margins in Europe over the past two weeks to just $5.75 per barrel on Thursday, a fifth of where they stood at the same time last year”

The US$ looks similarly ready to make a move out of its tramlines, as the Eurozone debt crisis re-emerges into public view.  The key is the Italian banking system, which appears close to collapse.  I will look at this shortly.

WEEKLY MARKET ROUND-UP
My weekly round-up of Benchmark prices since the Great Unwinding began is below, with ICIS pricing comments:
Brent crude oil, down 54%
Naphtha Europe, down 56%. “European gasoline refinery margins have come under increasing downward pressure on an escalation in Atlantic Basin inventory levels.”
Benzene Europe, down 55%. “Other players had a more bearish outlook for oil and energy numbers in the coming weeks, and expect that to pull benzene prices down.”
PTA China, down 39%. “Sentiments were bearish, as a major Chinese PTA producer continued to sell large volumes of Chinese Yuan (CNY)- denominated PTA cargoes this week, with the selling frenzy continuing from last Friday”
HDPE US export, down 33%. “Some Chinese traders opted to stand on the sideline as they hold comfortable inventory levels and an uncertain outlook of the market”
US$ Index, up 18%
S&P 500 stock market index, up 9%