China’s devaluation could be the trigger for an international debt crisis, as I describe in my latest post for the Financial Times, published on the BeyondBrics blog

We fear that the renminbi’s fall below Rmb7 per dollar on August 5 will act as just such a catalyst — this time, for the onset of a global debt crisis that has long been in the category of an accident waiting to happen.

The risk is summarised in the chart below from the Institute of International Finance, showing the seemingly inexorable rise in global debt over the past 20 years

Central banks came to believe that business cycles could be abolished by the use of stimulus, first through subprime and then through quantitative easing. This would encourage the return of the legendary “animal spirits” and allow the debt created to be wiped out by a combination of growth and inflation. 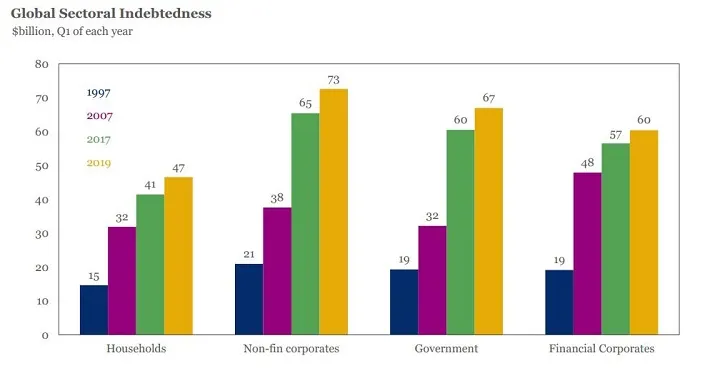 Unfortunately, as we have argued here before, this belief took no account of demographics or the impact of today’s ageing populations in slowing demand growth.

The baby boomers, who created the growth supercycle when they moved into the wealth creator 25-54 generation, have now joined the cohort of perennials aged 55 and above. They already own most of what they need. The focus on stimulus means that policymakers have failed to develop the new social/economic policies needed to maintain soundly-based growth in a world of increasing life expectancy and falling fertility. Instead, stimulus policies have created overcapacity and today’s record levels of debt.

As William White, a former chief economist of the Bank for International Settlements, warned at Davos in 2016: “It will become obvious in the next recession that many of these debts will never be serviced or repaid, and this will be uncomfortable for a lot of people who think they own assets that are worth something.” Presciently, he suggested that the trigger for the crisis could be a Chinese devaluation. 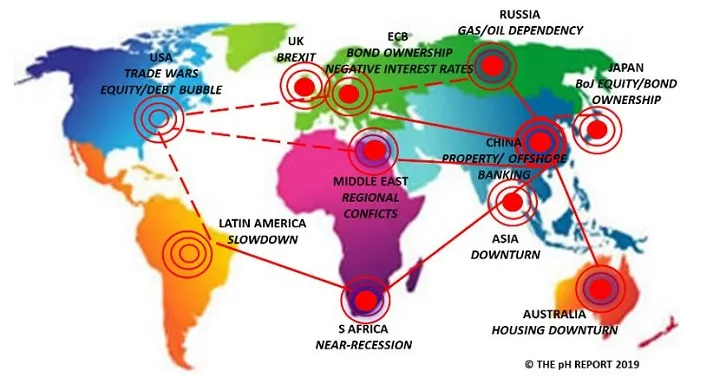 The risk, outlined in our second chart, is that central banks have created a debt-fuelled global “ring of fire”. China has undertaken around half of all global stimulus since 2008, in effect creating subprime on steroids. As we noted here last year, its tier 1 cities boast some of the highest house-price-to-earnings ratios in the world, while profits from property speculation allowed car sales to rise fourfold from 500,000 a month in 2008 to 2m a month in 2017.

As the FT reported in April, investors have already been spooked by rising levels of dollar debt in China’s property sector. This debt is set to open the global ring of fire, as US president Donald Trump raises the stakes in his trade war. The president and his advisers seem to have chosen to ignore the very real risk of currency devaluation, as markets respond to the impact of tariffs on the economy:

The issue is the risk of contagion from one market to another. Risks in individual silos can be bad enough, but if they spread across boundaries it quickly becomes hard to know who is holding the risk. As US Federal Reserve chairman Jay Powell warned in May while discussing potential problems in the market for collateralised loan obligations (CLO):

“Regulators, investors, and market participants around the world would benefit greatly from more information on who is bearing the ultimate risk associated with CLOs. We know that the US CLO market spans the globe . . . But right now, we mainly know where the CLOs are not — only $90bn of the $700bn in total CLOs are held by the largest US banks . . . In a downturn institutions anywhere could find themselves under pressure, especially those with inadequate loss-absorbing capacity or runnable short-term financing.”

The CLO market is just one part of the problem. As S&P Global reported recently, more than $3tn of US corporate debt is rated triple B, with $1tn rated triple B minus, the lowest level of investment grade. US companies account for 54 per cent of the world’s $7tn total triple B debt. The risk of contagion in any sell-off is clear, as many institutions would have to sell if recession forced rating agencies into downgrades, taking debt below investment grade.

In turn, this would add to the risks in US equity markets, which are already at extreme valuations. Pension funds would be most at risk as they have been major investors in corporate debt and in recent years have entered markets such as the Asian offshore US dollar market in their search for higher yields. A downturn in their returns would risk creating a vicious circle, forcing companies to increase their pension contributions just at the moment when their earnings are already under pressure as the trade war slows the global economy.

Mr Trump may come to regret his comment that “trade wars are good and easy to win”. We envisage a testing time ahead, particularly as only those over 60 have personal experience of even the “normal” business cycles seen before the boomer supercycle began.