A branch of Centaline Property Agency in Hong Kong © Bloomberg

Indebted Chinese property developers threaten a domino effect on western credit markets , as I describe in my latest post for the Financial Times, published on the BeyondBrics blog

Second-order impacts are starting to appear as a result of China’s lockdowns. These are having a big impact on the critical property sector, which makes up as much as 25 per cent of gross domestic product.

Housing sales fell almost 40 per cent in February and seem likely to be down again in March, while developer Evergrande cut prices to try and maintain its cash flow. This creates growing risk in the offshore dollar market, where property developers have been significant borrowers, with Fitch already warning of possible defaults. It is unclear whether local authorities can provide much support, as their dependence on revenue from land sales means their own position is weakening.

Rightly, the world’s attention has focused on the impact on public health of the coronavirus pandemic and the best ways of mitigating it. But as Martin Wolf highlights in the Financial Times, the virus is an economic emergency too, with the ability to plunge the world into a depression. Talk of the reforms made to the world’s banking systems since 2008 misses the point. The risk is now centred on the vast build-up of corporate debt since the global financial crisis, under the easy money policies of the world’s central banks. 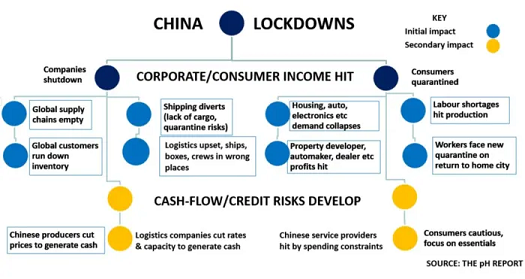 China’s property sector is unfortunately the epicentre of this debt. As we noted in the FT in August: “Its tier 1 cities boast some of the highest house-price-to-earnings ratios in the world, while profits from property speculation allowed car sales to rise fourfold from 500,000 a month in 2008 to 2m a month in 2017.” Last month’s collapse of car sales back to 2005 levels of 244,000 confirms the damage that has been done.

Sales by China’s top 100 property developers plunged by 44 per cent in February, and Caixin reports that over 100 builders went bust in the January-February period, normally one of the busiest times for property sales. Equally worrying, as Caixin’s chart below illustrates, is that, although the largest developer, Evergrande, bucked the trend, this was only because it cut prices by 25 per cent in February and offered 22 per cent reductions this month.

There are few signs of a sustained upturn, with S&P reporting that housing starts were down 45 per cent across January-February. S&P adds that property sales could fall 20 per cent this year, if the effects of the lockdowns are still being felt in April, as seems likely. 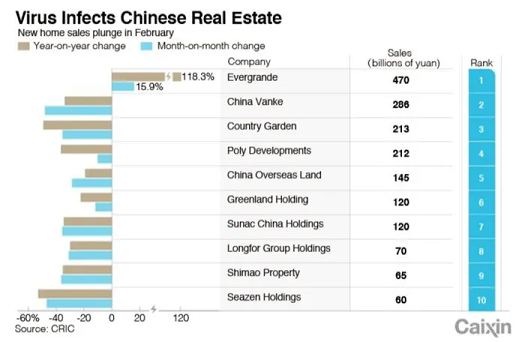 The issue is that we are now starting to see second-order impacts of the lockdowns emerge, particularly in terms of consumer affordability and supply chain disruption:

We can probably assume that truck drivers have now been released from emergency duties and from quarantine (if they travelled from infected areas across provincial borders). But we have no idea if their basic equipment — containers, specialist materials, etc — is in its normal place. We do know, however, from the shipping industry that its activity has been severely disrupted, with ships away from their usual moorings and many idled due to lack of work; containers and crew are equally disrupted.

It is safe to assume that most Chinese companies and consumers are short of cash and that consumers will cut back on all but essential spending, further depressing demand. This creates the risk of a vicious circle, whereby property sales remain depressed, reducing developer cash flow still further after most building activity came to a standstill during the lockdowns.

Fitch Ratings identified five Chinese corporations with a high risk of refinancing in a recent report, four of which are in the homebuilding sector, citing concerns about near-term capital market debt maturities and the unpredictability of the epidemic. A further sign of stress, as the Financial Times has reported, is that land sales are now running at less than a quarter of average levels.

We have warned here for some time that China’s property market has been ‘subprime on steroids’. Property sales have been buoyed by vast government stimulus programmes. And western investors have flocked to lend in the offshore dollar market, attracted by the high interest rates on offer compared to those in their domestic markets under central banks’ zero-interest rate policies.

The renminbi’s weakening beyond Rmb7 to the US dollar adds to the difficulties developers will face in servicing their dollar debts.

The potential for a domino impact on western credit markets from a coronavirus-related downturn in China’s property market should already be keeping regulators up at night.