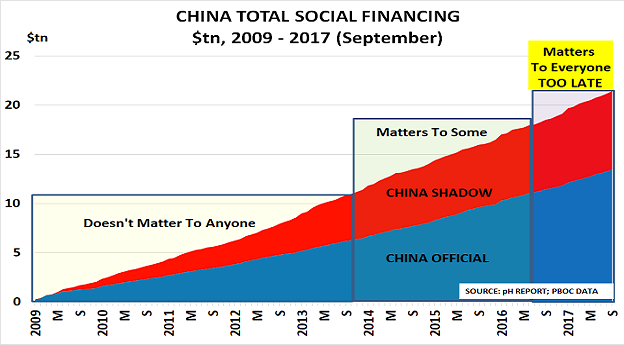 The world is coming to the end of probably the greatest financial bubble ever seen.  Since the financial crisis began in 2008, central banks in China, the USA, Europe, the UK and Japan have created over $30tn of debt.

China has created more than half of this debt as the chart shows, and its total debt is now around 260% of GDP.  Its actions are therefore far more important for global financial markets than anything done by the Western central banks – just as China’s initial stimulus was the original motor for the post-2008 “recovery”.

Historians are therefore likely to look back at last month’s National People’s Congress as a key turning point.

It is clear that although Premier Li retained his post, he has effectively been sidelined in terms of economic policy.  This is important as he was the architect of the stimulus policy.  Now, President Xi Jinping appears to have taken full charge of the economy, and it seems that a crackdown may be underway, as its central bank chief governor Zhou Xiaochuan has been explaining:

We can be sure that Zhou was not speaking “off the cuff” or just in a personal capacity when he made these statements, as his comments have been carried on both the official Xinhua news agency and on the People’s Bank of China website.  As Bloomberg report, he went on to set out 10 key areas for action:

Clearly, Xi’s reappointment as President means the end of “business as usual” for China, and for the support provided to the global economy by Li’s stimulus policies.  Xi’s own comments at the Congress confirm the change of direction, particularly his decision to abandon the idea of setting targets for GDP growth.  As the press conference following the Congress confirmed, the focus is now on the quality of growth:

“China’s main social contradiction has changed and its economic development is moving to a stage of high-quality growth from a high-rate of expansion of the GDP,” said Yang Weimin, deputy head of the Office of the Central Leading Group on Financial and Economic Affairs. “The biggest problem facing us now … is the inadequate quality of development.”

Companies and investors should not ignore the warnings now coming out from Beijing about the change of strategy.  China’s lending bubble – particularly in property, is likely coming to an end.  In turn, this will lead to a bumpy ride for the global economy.