Skip to content
Home / Chart of the Year: US$, 10-year US interest rates begin to rise 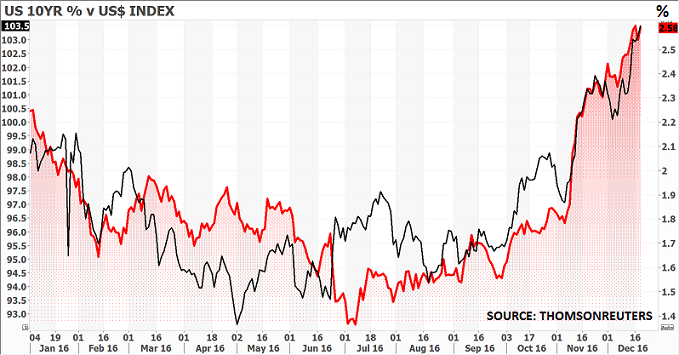 Last year it was the oil price fall.  This year, there is no doubt that the US dollar has taken centre stage, alongside the major rise underway in benchmark 10-year interest rates.  As 2016′s Chart of the Year shows:

  The US$ Index (black) has risen 12% since May against other major currencies (euro, yen, pound, Canadian dollar, Swiss franc, Swedish krona), and is now at its highest level since 2003
  Benchmark 10-year US interest rates (red) have almost doubled from 1.4% in July to 2.6% today.  They are back to 2013-4 levels, when the Fed proposed “tapering” its stimulus policy

Clearly something quite dramatic is now underway.

In currency markets, investors are voting with their feet.  It is hard to see much upside in the European, Japanese or Canadian economies in the next 12 – 18 months.  Europe is going to be gripped by the unfolding crisis over the future of the euro and the EU itself, as it moves through elections in The Netherlands, France, Germany and probably Italy. By March, the UK will be on the Brexit path, and will leave the EU within 2 years. Japan is equally unattractive following the failure of Abenomics, whilst Canada’s reliance on commodity exports makes it very vulnerable to the downturn underway in the BRICs (Brazil, Russia, India, China).

Investors are also waking up to the uncomfortable fact that much of today’s borrowed money can never be repaid. McKinsey estimated global debt at $199tn and 3x global GDP at the start of 2015, and the total is even higher today.

As I warned a year ago in “World faces wave of epic debt defaults” – central bank veteran), there is no easy route to rescheduling or forgiving all this debt.  Importantly, central banks are now starting to lose control of interest rates. They can no longer overcome the fundamentals of supply and demand by printing vast amounts of stimulus money.

This is the Great Reckoning for the failure of stimulus policies in action.

THE RISES WILL CREATE “UNEXPECTED CONSEQUENCES” FOR COMPANIES AND INVESTORS
These moves are critically important in themselves as the dollar is the world’s reserve currency, and US interest rates are its “risk-free” rates. Unsurprisingly, interest rates are already now rising in all the other ‘Top 15′ major economies – China, Japan, Germany, UK, France, India, Italy, Brazil, Canada, S Korea, Russia, Australia, Spain, Mexico. Together, these countries total 80% of the global economy.

The rises are also starting to create unexpected “second order impacts”.  For example, many companies in the emerging economies have large US$ loans, which appeared to offer a cheaper interest rate than in their home country. Suddenly, they are finding that the cost of repayment has begun to rise quite rapidly.

This happens in almost every financial crisis:

  People become excited by the short-term cost of borrowing – “Its so cheap, just $xxx/month”
  They totally forget about the cost of repaying the capital  -”I never thought the dollar would get that strong”

There were $9tn of these loans last year, according to the Bank for International Settlements.  Many were to weak companies who are likely to default if the dollar keeps rising along with US interest rates.

In turn, these defaults will also have unexpected consequences.  Lenders will suffer losses, and will be less able to lend even to stronger companies.  Higher borrowing costs will force consumers to cut back their spending.  This risks creating a vicious circle as corporate interest costs rise whilst revenues fall.

China is the obvious “canary in the coalmine” signalling that major problems lie ahead.

  The Wall Street Journal chart shows 10-year rates have risen despite central bank support
  Its total debt is around $27tn, or 2.6x its GDP, due to housing bubble and other speculation
  The central bank now has to sell its US Treasury holdings to support the domestic economy
  In turn, of course, this pushes US rates higher, as rates move inversely to bond prices

China used to hold around 10% of US debt, and was the largest foreign holder. Japan holds similar amounts, and is also stepping back from purchases due to the growing exchange rate volatility.

Nobody else has the financial firepower to take their place.  The only possible replacements – Saudi Arabia and the Gulf countries – have seen their incomes fall with the oil price, whilst their domestic spending has been rising.  This means interest rates and the US$ are likely to carry on rising.

Higher rates will further weaken the US economy itself, particularly if President Trump launches his expected trade war.  In the important auto market, GM has just announced production cutbacks next month due to falling sales, despite the industry having raised incentives by 21% to nearly $4k/car. GM’s inventories are now 25% higher than normal at 86 days versus 69 days a year ago.  Housing starts fell 7% last month, as mortgage rates began to rise.

And then there is India, the world’s 7th largest economy and a leading oil importer.  Its rates are now rising as shocked investors suddenly realise recession is a real possibility, if the currency reform problems are not quickly resolved.

These risks are serious enough.  But they are very worrying today, due to the steep learning curve that lies ahead of all those who began work after the start of the Boomer-led SuperCycle in 1983.

  They assume that “recessions” are rare and last only a few months as central banks always rescue the economy.
  Only those who can remember before the SuperCycle know that markets and companies should have long ago taken fright as these risks began to develop