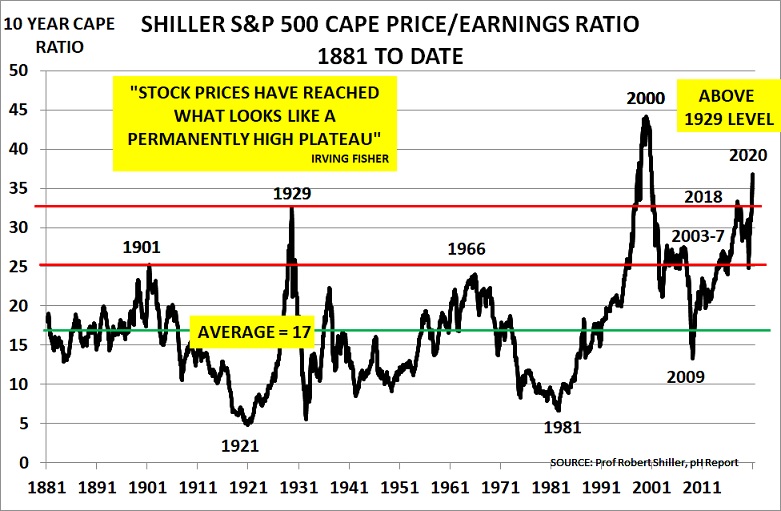 Each year, it seems there is only one candidate for Chart of the Year. And 2020 is no exception. It has to be the CAPE Index developed by Nobel Prize winner, Prof Robert Shiller.  As the chart shows, it is nearly at an all-time high with Tesla’s addition to the S&P 500. Only the peak of the dotcom bubble in 2000 was higher.

Last year’s Chart of the Decade was an early warning of problems ahead, showing how the S&P 500 had seen its longest-ever run without a 20% downturn. And the bubble duly began to burst in March. But then the US Federal Reserve rushed to its rescue, as it has done continually since 2009, based on the concept of then Fed Chairman, Ben Bernanke that:

Of course, this is nonsense as we have seen since 2009. But for the moment, the Fed feels it would look stupid if it suddenly went back to William McChesney Martin’s policy that it should instead:

“Take away the punchbowl as the party gets going”.

But at some point, the Fed will realise it cannot challenge 150 years of S&P history.

Rule No 1 of famous market guru, Bob Farrell, is that “Markets tend to return to the mean over time”.  And today the CAPE (Cyclically Adjusted Price/Earnings) Index, is even above 1929’s level.

INVESTORS ARE AT PEAK EUPHORIA
The S&P has already seen a V-shaped recovery since March, due to the combination of furlough money and stimulus.  Investors are now expecting more of the same:

Their confidence would be remarkable at the best of times, but it is extraordinary today given the dire state of the economy, with lockdowns continuing:

Financial markets have always fluctuated between fear and greed. And the CAPE Index is telling us we are at “peak greed” today. Even the March panic only saw CAPE drop back to the 1901, 1966 and 2007 peaks. So prudent investors should assume the real downturn is still ahead.

Importantly, as the second chart highlights, there is a strong link between the CAPE value and future returns, due to the ‘reversion to the mean’ rule:

History suggests the S&P 500 will likely fall by around 2/3rds over the next decade to 2030, reversing the gains since 2009.  Over-hyped stocks like Tesla will be in the eye of the storm – as in the dotcom crash.

This is why the chart of the CAPE Index plotted against past returns is my Chart of the Year.