Each year, there has been only one possible candidate for Chart of the Year.  Last year it was the collapse of China’s shadow banking bubble; 2017 was Bitcoin’s stratospheric rise; 2016 the near-doubling in US 10-year interest rates; and 2015 the oil price fall.

This year, the ‘Chart of the Decade’ is in a league of its own. Produced by Goldman Sachs, it shows that the S&P 500 is in its longest-ever run without a 20% downturn.

The reason for this amazing performance is not hard to find.  It has been caused by the US Federal Reserve’s adoption of Ben Bernanke’s concept that:

Set out in 2010, it replaced the previous policy set out by William McChesney Martin that their job was:

“To take away the punchbowl as the party gets going”. 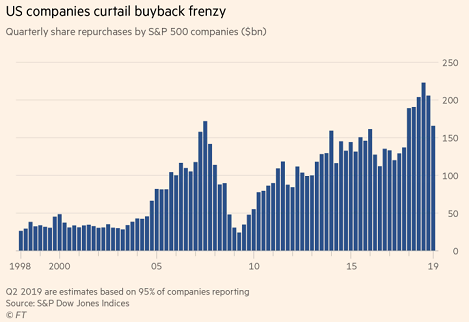 “Don’t fight the Fed” is one of the best short-term investment principles, but the Fed’s success is quite extraordinary when one looks back over the past decade.  Each time the market has threatened to slide, they have rushed in with yet more support:

Remarkably, these buybacks came at a time when profits were actually falling as a percentage of GDP, as the third chart shows. Investors should really have been pulling out of shares, rather than buying more. But after so many years of Fed support, most asset managers had either forgotten how to read a Profit & Loss account and Balance Sheet – or had decided these were irrelevant to stock valuation.

Since September, we have been in a new Fed stimulus cycle. As I noted then, a $50bn hole had appeared in New York financial markets.  Regulators and consensus commentators combined to explain this was only due to temporary factors. But since then, the support has reached $376bn, and the Fed has announced it will happily supply another $500bn of support to cover possible year-end problems, probably taking the total close to $1tn since September.

Behind this panic is the IMF’s warning that the $8.1tn of Treasury bonds available as collateral for the repo market, are in fact “owned” by an average of 2.2 different banks at the same time. Understandably, bank CFOs are pulling back, and trying to establish if “their” Treasury bonds in fact belong to someone else.

Regulators should never have allowed this to happen.  They should also have focused long ago – as I suggested this time last year – on the implications of the decline in China’s shadow banking sector.  Just as I expected, China is now exporting deflation around the world, with its PPI falling since June.

China’s slowdown also means an end to the flow of Chinese cash that flooded into New York financial markets, which hedge funds have then leveraged into outsize profits in financial markets. 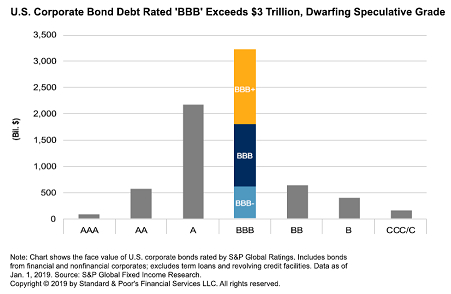 The Fed turned a blind eye to this, just as it allowed BBB corporate debt to expand at a record rate, as the chart from S&P confirms.   As we noted in June’s pH Report:

“US BBB grade debt, the lowest grade in which most funds are allowed to invest, is now more than $3tn, with 19% of this total ($579bn) in the very lowest BBB– grade. And this BBB– total jumps to $1tn if one includes financial sector debt. S&P also report that global BBB debt is now $7tn, with US companies accounting for 54% of the total.

“The problem is that BBB- debt becomes speculative debt if it is downgraded by just one notch to BB grade. And most investors are then forced by their mandate to sell their holding in a hurry, creating the potential for a vicious circle, as the most liquid bonds will inevitably be sold first. In turn, this creates the potential for a “waterfall effect” in the overall bond market – and to contagion in the stock market itself.”

The Fed’s focus on boosting the stock market is clearly going to end in a debt crisis.  But when warning of this, the consensus responds as in 2006-8, when I was warning of a global financial crash, “That’s impossible”.  And no doubt, once the debt crisis has occurred, it will again claim “nobody could have seen this coming”.