Skip to content
Home / Europe heads into the Great Unknown as UK prepares for Brexit; Dutch and French voters go to the polls 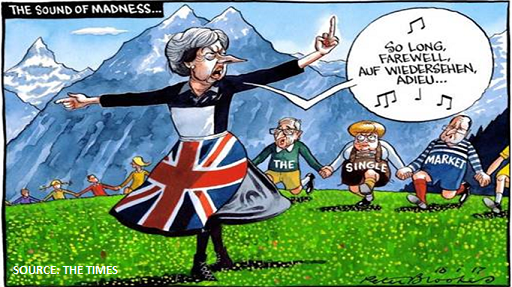 Next month sees the start of a process that could change all our lives.  Whether we live in Europe, or outside it, the political decisions about to be made have the potential to impact every country in the world – for better or worse.

And yet, nobody has yet begun to put together the various pieces of the jigsaw, and identify the wide range of different outcomes that could emerge.  By the end of the year, the EU and the eurozone might have collapsed – with massive impact around the world.  Or ‘business as usual’ might continue.  Or we might have a revived French-German partnership again, reigniting the energy that first began to rebuild Europe after World War 2.  None of us know, and it is very dangerous to keep pretending that ‘business as usual’ is the only option.

The changes are so vast, and so different in their potential outcomes, that I will explore them in two separate posts this week.  Today, I will look at Brexit and the current outlook for the Dutch and French elections.  On Thursday, I will look at the outlook in Italy and Germany, and draw some conclusions about what may happen.

   Brexit is the first unknown.  The UK expects to start the process of leaving the European Union (EU) next month.  Premier Theresa May has now published the government’s position on the talks.  But what will happen when she presents her terms in Brussels?  She wants to retain access to the Single Market for critical UK industries such as financial services, autos, aerospace and chemicals – but she doesn’t want to allow immigration to continue on the current basis, and she probably doesn’t want to pay the €60bn bill that Brussels believes she will owe on leaving.

So what will happen?  Will it be sweetness and light, with everyone singing “For she’s a jolly good fellow” as she walks out the door?  Or will there be furious arguments, and no agreements for UK trade in the post-Brexit world?  And what will happen back in the UK while all this takes place?  Will businesses simply sit back?  Or will some decide it would be prudent to move to France, Germany, Ireland or elsewhere?  And what might happen in Parliament, where May only has a majority of 12, if things go badly?  Could her term as premier end up being one of the shortest on record?

   The Dutch elections are the next unknown on 15 March.  Geert Wilders, the anti-immigration, anti-EU candidate for premier, is currently leading in the polls.  But will he do better, or worse, when the time comes to actually vote?  As we know from the Brexit and US Presidential elections, the polls are not always accurate – if people who have not voted in the past, now decide it is time they went to the polling station.  And if Wilders does win, will he be able to form a government?  Current premier, Mark Rutte, has said he will refuse to work with him.  So it could be a very lengthy process before The Netherlands has a new and stable government.

And what would happen if Wilders did become premier?  His main policy is leaving the EU.  On what terms would he seek to do this – would he adopt the same positions as Theresa May, or would he have different priorities?  And would the EU itself survive the departure of one of its original 6 members?  Many people think it wouldn’t.

   France’s presidential elections are next, on 23 April. French polls were completely wrong in the primaries – Alain Juppé was defeated by Francois Fillon for the Republican nomination, Manuel Valls was defeated by Benoît Hamon for the Socialist nomination.  At the moment, Emmanuel Macron with his new En Marche! movement, and Marine Le Pen of the National Front, seem likely to go through to the final round.  Their outsider status is critical to their appeal, but their policies couldn’t be more different. Macron wants to revive the EU, le Pen wants to leave it.

What about the alternative, a win for Macron – who only declared his candidacy in November, and is still forming his new party?  He has recognised that the curo cannot survive in its current structure, and has argued the EU should develop “a roadmap for Europe” in critical areas including defence, security and the economy.  If fellow social democrat, Martin Schulz, were to be elected Chancellor in Germany in October, the stage could be set for a dramatic reshaping of EU policy – and probably also its membership.  The contrast with Ms le Pen’s plans couldn’t be stronger.

GREAT UNKNOWNS LIE AHEAD OF US
These uncertainties would be difficult enough to manage on their own.  Brexit itself is a complete unknown, effectively tearing up the last 43 years of UK law and economic policy.  But it could easily be over-shadowed by developments in The Netherlands and France.  If either or both decide to leave the EU, who really knows what would happen to the European and global economy, the value of European currencies, or Europe’s relationships with the rest of the world?

But these uncertainties are only part of the Great Unknowns now ahead of us.

On Thursday, I will look at the highly uncertain political outlook in Italy and Germany.  I will also highlight the very different possible outcomes from Europe’s plunge into the Great Unknown – which has the potential to impact all of us, whether we live in Europe or elsewhere.