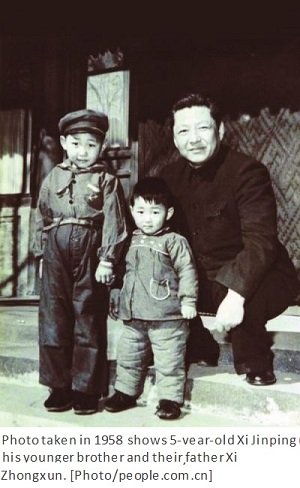 Xi Jinping was formally confirmed as China’s new president this week. But we know remarkably little about him, apart from a rather dry list of his official positions as he climbed the career ladder. This is understandable, given the chaos that resulted from Mao’s personality cult and the Cultural Revolution.

However, we do know something about Xi’s father, Xi Zhongxun, who died in 2002 at the age of 89. He was purged 3 times by Mao, despite being a Party member from 1928 and one of those who welcomed Mao at the end of the Long March. Thus although Xi Jinping is now called a ‘princeling’, his upbringing was hardly privileged. His father spent 16 years in jail – half in solitary confinement.

The blog only came to know of Xi Zhongxun much later, when it was helping to lead ICI’s Asian business development activities between 1987-92. The connection was that Xi had been sent in 1978 to run Guangdong province (next door to ICI’s Asian HQ in Hong Kong), after having been rehabilitated once Mao died.

It was very clear to us that Xi was completely different to most other Party figures. Most notably, he asked previously unasked questions – as Robert Kuhn’s book ‘How China’s Leaders Think’ describes.  Kuhn notes that:

“Xi wondered why, if 80% of Hong Kong’s population was from Guangdong, was Hong Kong so developed and Guangdong so backward?”

Xi’s answer was potentially still heresy at the time, as he concluded that the difference was not geography or people, but the system. And so in 1979 he persuaded the Central Committee to make Shenzhen and Zhuhai (then typically backward villages) into ‘Special Economic Zones’, so they could “explore the new road” for economic development.

Xi also made no compromises on the road to modernising Guangdong’s economy. As he told his team, “To develop, we have to change. We have to do it even if we have to lose our lives. Comrades, let us work hard”. And within 10 years, he had created 10 cities to rival Hong Kong, where none had existed before.

Xi Jinping may or may not be like his father. But as the blog noted in April 2010, he was the first senior Chinese leader to recognise that the era of export-led development was over and that instead:

“We must develop the economy mainly by relying on the domestic market and attach great importance to domestic demand, especially consumption demand, in driving economic development.”

He has an exceptionally difficult task ahead, perhaps even more difficult than his father’s. He has to change the whole direction of China’s economic development. All of us, and not just China, will suffer if he fails. The blog therefore wishes him well.