The blog is very pleased to have been invited to contribute to the Financial Times’ new FT Data blog.

Its first post looks at benzene’s excellent forecasting record during the current crisis. It also looks at what PTA may be telling us about the strength of China’s economy. 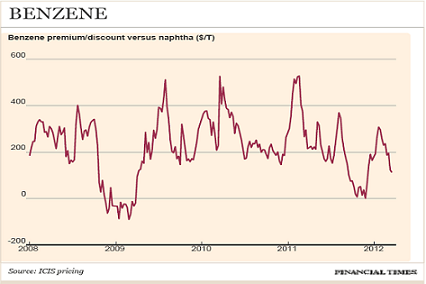 Chemical prices might not be the first forecasting indicator that springs to mind. But over the recent economic crisis, benzene in particular has highlighted economic shifts well before more traditional metrics.

Benzene’s 40 million tonnes of global sales are a key raw material for a very diverse group of end-products, including polystyrene cups, nylon clothing and carpets, pesticides and dyes. Equally, as it is produced from crude oil, benzene provides a highly-sensitive barometer of consumer reactions to changing energy prices.

A key metric is its price premium to naphtha (its oil-based feedstock). The chart above shows this metric since the crisis began in (using ICIS pricing data).

• Typically, the premium has found a floor at $150/tonne
• But it collapsed during October 2008, remaining very weak until February 2009
• The depth of the downturn was also demonstrated by the premium becoming a discount
• It then staged a sharp recovery, which took it back above the $150/t level

Therefore, benzene highlighted, well ahead of other indicators, both the downturn in the wider economy and the equally sudden upturn.

The major increase in oil prices from November 2010 to April 2011 gave powerful support to benzene’s price premium. Companies down the value chain cannot simply increase their own prices overnight. Instead, they have to protect their margins by buying forward, giving a perception of robust demand.

However, the premium’s subsequent collapse between August to October indicated that higher oil prices were actually reducing end-user demand. Even more worrying is that recent renewed support from rising oil prices has proved short-lived. Instead, the premium has been steadily eroding since January.

The decline cannot be related to developments on shale gas, as this is not a feedstock for benzene. Benzene may therefore be flagging an important message about consumers’ fading resilience to today’s higher crude oil prices. 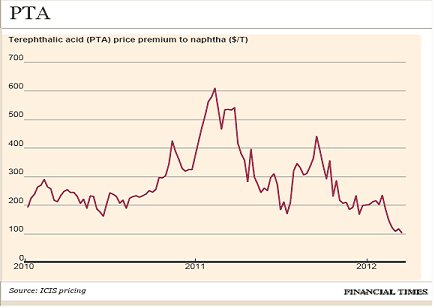 Benzene is not the only chemical with forecasting ability. Terephthalic acid (PTA) is similarly well-placed as a key raw material for polyester, where China is the dominant player. Its price premium versus naphtha can provide valuable insight into China’s economic health.

As the chart shows, the floor for its premium has typically been $200/tonne. But this has halved in recent weeks, despite the end of China’s holiday period. Equally, as with benzene, reports from end-user markets suggest that consumer demand is weakening.

PTA is thus warning that China’s economy could be slowing faster than generally realised.