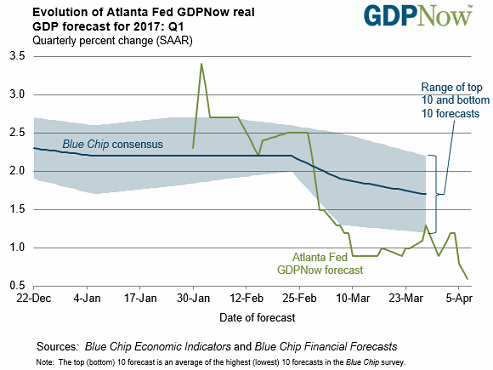 US GDP growth is slowing, again, as the chart of the Atlanta Federal Reserve’s “GDP Now” forecast shows:

   Forecast Q1 growth has slipped to just 0.6% from an initial 3.4% at the end of January
   Consensus economic forecasts are still much higher, but even they have fallen to 1.7% from 2.2%

The decline has been accelerating, due to disappointing data from a range of key indicators. as the Atlanta Fed note:

Worryingly, therefore, we seem to be repeating the usual pattern of disappointment – with New Year optimism being followed by harsh reality – as the US Federal Reserve’s deputy chairman, Stanley Fischer, noted nearly 3 years ago: 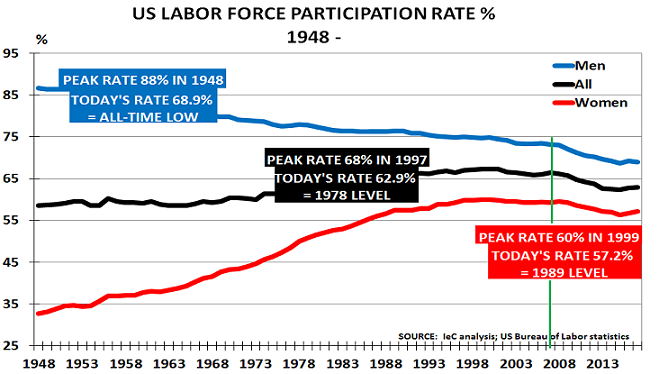 The key issue, of course, is that policymakers have still not accepted that the US economy is inevitably moving into a low-growth mode, due to its ageing population.  As the Chief Economist of the Bank of England, Andy Haldane noted recently, the impact of:

“Demographics in mainstream economics has been under-emphasized for too long”

There is little sign of the new policies that are urgently required to take account of the changes that have taken place in life expectancy and fertility rate.  As a result, forecasts continue to be made on the basis of wishful thinking at the start of each New Year. As I noted in December:

□  Increasing life expectancy means people no longer routinely die around pension age. Instead, a whole New Old generation of people in the low spending, low earning 55+ generation is emerging for the first time in history. The average western BabyBoomer can now expect to live for another 20 years on reaching the age of 65
□  Fertility rates in the developed world have fallen by 40% since 1950. They have also been below replacement levels (2.1 babies per woman) for the past 45 years. Inevitably, therefore, this has reduced the relative numbers of those in today’s Wealth Creator cohort, just as the New Old generation is expanding exponentially

Friday’s US jobs numbers confirmed this obvious truth, as the second chart shows:

□  Less than 2/3rds of the US over-16s population now have jobs.  The current percentage of 62.9% is back at 1978 levels – when the median age was 30 years, compared to today’s 38 years – and so relatively more young people were still in school and college
□  The picture for men is particularly worrying, with just 68.9% at work, an all-time low.  The dcline seems to have accelerated since the Finanical Crisis began, with the participation rate falling from 73.2% in 2007
□   The percentage of women working is also still in decline, although at a slower rate.  It is at 57.2% today compared to the 60% peak in 1999 before Boomer women began to retire 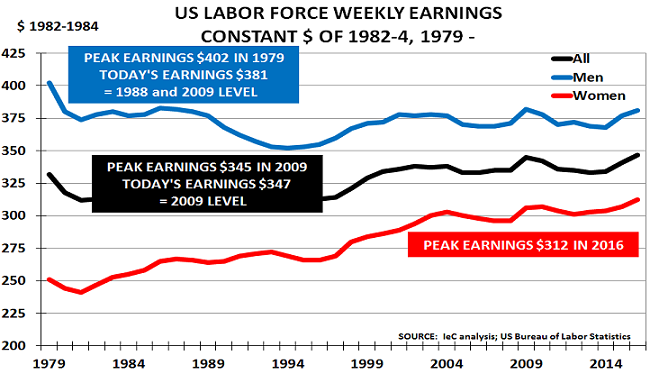 Even more worrying is the data shown on the 3rd chart, which highlights the changes in real wages, adjusted for inflation, since records began in 1979:

It is no great surprise that US and global GDP continue to disappoint, given this evidence from the jobs market.  And nothing will change until policymakers accept that today’s ageing populations require completely new policies.