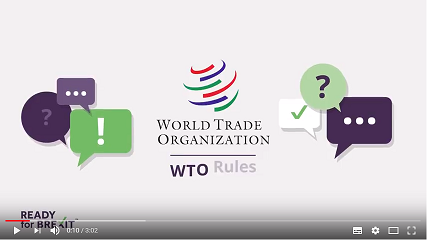 Last week, the UK’s Foreign Secretary, its chief Brexit negotiator and several junior ministers, resigned.  President Trump gave an interview attacking the UK prime minister, Theresa May, and suggesting her policies would “kill” any future trade deal with the US.  And the EU 27’s main negotiator on the critical Brexit issue, Michel Barnier, warned:

“On both sides of the Channel, businesses… should analyse their exposure to the other side and be ready, when necessary, to adapt their logistical channels, supply chains and existing contracts.  They should also prepare for the worst case scenario of a “no deal”, which would result in the return of tariffs under WTO rules.” (My emphasis)

It was quite a week.  None of us know what may happen next, as I warned when Ready for Brexit launched last month.

WHAT ARE WTO RULES?
It is now less than 9 months until the UK officially leaves the EU on 29 March.  Yet according to a ReadyforBrexit poll:

They could have a considerable shock ahead of them, as the Brexplainer video above explains.

Currently, the UK trades with the world on the basis of around 750 agreements negotiated by the EU.  Trade between the current 28 EU members is covered by the Single Market and Customs Union.  But as Barnier warns, if there is no deal agreed by 29 March, then WTO rules will apply:

HAS YOUR BUSINESS PLANNED AHEAD FOR A ‘NO DEAL’ BREXIT?
Most major businesses have been planning for a ‘no deal’ scenario for some time:

Most smaller businesses have assumed they don’t need to do anything.  Yet 29 March is now only 257 days away.

SURELY ITS CERTAIN THAT WITHDRAWAL AND TRANSITION AGREEMENTS WILL BE SIGNED?
After the Brexit vote in June 2016, the chief Brexit negotiator, David Davis, was confident that all the major trade deals would be finalised by July 2018:

“Be under no doubt, we can do deals with our trading partners, and we can do them quickly… So within two years, before the negotiation with the EU is likely to be complete, and therefore before anything material has changed, we can negotiate a free trade area massively larger than the EU.”

But by September last year, he had changed his mind and was instead warning as the Telegraph noted:

“Nobody ever pretended this would be simple or easy.”

And now, of course, Davis has resigned along with his fellow Leave campaigner, Boris Johnson.

As the UK’s main business organisation, the CBI, warned on Friday “It will be a make or break summer:

‘With three months left to go, it is now a race against time. The EU must now engage constructively and flexibly, as must politicians from all UK parties. This is a matter of national interest. There’s not a day to lose.’

We can all hope that negotiations are successful.  But hope is not a strategy.  And after the events of the last week, prudent managers now need to start start planning for ‘no deal’.  Please click here to watch the Brexplainer video.

The post UK faces ‘make or break summer’ as ‘No Deal’ Brexit risk rises appeared first on Chemicals & The Economy.