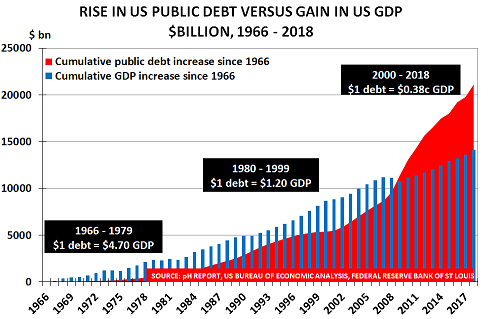 Uber’s IPO next month is set to effectively “ring the bell” at the top of the post-2008 equity bull market on Wall Street.  True, it is now expecting to be valued at a “bargain” $91bn, rather than the $120bn originally forecast. But as the Financial Times has noted:

And Friday’s updated prospectus confirmed that it lost up to $1.1bn in Q1 on revenue of $3.1bn. In more normal times, Uber would have been allowed to go bankrupt long ago,

After all, if one ignores all the hype, Uber is just a very ordinary business doing very ordinary things.  Most people, after all, could probably run a serially loss-making taxi and food delivery service, as long as someone else agreed to keep funding it.

Yes, like the other “unicorns”, it has a very customer-friendly app to help customers to use its service. But in terms of its business model: 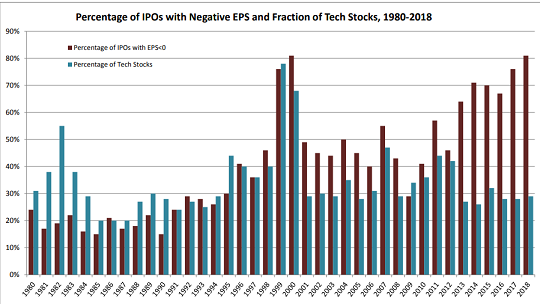 This addiction to debt on such a scale, and for such a long period, has changed financial market behaviour.

Nobody now needs to do the hard graft of evaluating industry dynamics, business models and management capability.  Instead, they just need to focus on buying into a “hot sector” with a “story stock”, and then sit back to enjoy the ride. The chart above from Prof Jay Ritter confirms the paradigm shift that has taken place:

Like other so-called “unicorns with $1bn+ valuations, today’s debt-fuelled markets have allowed Uber to raise money for years in the private markets. So why has Uber now chosen to IPO, and to accept a valuation at least 25% below its original target?. 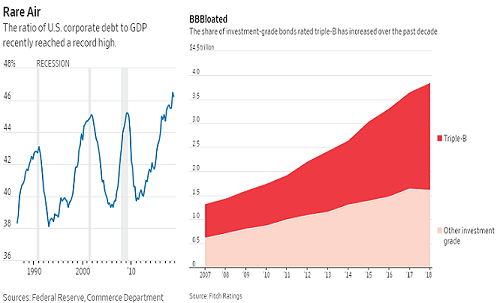 The above 2 charts from the Wall Street Journal start to suggest the background to its decision:

The problem is that much of the corporate debt raised in recent years has gone to fund share buybacks rather than investment for the future. President Trump’s tax cuts meant buybacks hit a record $806bn last year, versus the previous record of $589bn in 2007.  According to Federal Reserve data, investors sold a net $1.1bn of shares over the past 5 years – yet stock markets powered ahead as buybacks totalled $2.95bn.  As Goldman Sachs notes:

“Repurchases have consistently been the largest source of US equity demand. Since 2010, corporate demand for shares has far exceeded demand from all other investor categories combined.”

Against this background, it is not hard to see why the US Federal Reserve panicked in January as 10-year interest rates rose beyond 3%.  For years, the Fed has believed, as its then Chairman Ben Bernanke argued in November 2010 that:

Rising interest rates are likely to puncture the debt bubble that their stimulus policy has created – by reducing corporate earnings and increasing borrowing costs for buybacks.

Uber’s IPO suggests that the “smart money” behind Uber’s IPO – and that of the other “unicorns” now rushing to market – has decided to cash out whilst it still can, despite the valuation being cut. They must have worried that in more normal markets, they would never be able to float a serially loss-making company at a hoped-for $91bn valuation.

If they really believed Uber was finally about to turn the corner and become profitable at last, why would they accept a valuation some 25% below their original target of less than  a month ago?  The rest of us might want to worry about what they know, that we don’t.