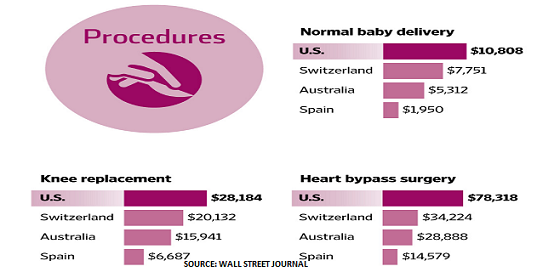 President Trump ran for office on the basis that he would “drain the swamp” in Washington, and deliver major change in a number of critical areas, as I noted immediately after his election on 14 November.  Sensibly, his “Contract with America” also recognised that his Top 10 legislative priorities would take time to deliver:

“I will work with Congress to introduce the following broader legislative measures and fight for their passage within the first 100 days of my Administration:

We are now more than halfway through his first 100 days, and already it is becoming clear that his priorities have been upended by House Republicans.  They have replaced Tax Reform at the top of their agenda with his 5th priority, Healthcare Reform, as the President confirmed earlier this month:

“Before we do the tax — which is actually very well finalized — but we can’t submit it until the health care statutorily or otherwise,” Trump told reporters before a White House budget meeting. “So we’re doing the health care — again moving along very well — sometime during the month of March, maybe mid-to-early March, we’ll be submitting something that I think people will be very impressed by.”

This is a potentially major setback for Trump’s agenda given that, at best, Congress is unlikely to agree on a healthcare bill before the summer.  This will mean he has lost 6 critical months in which to push forward on tax reform, his top priority. In turn, any progress on his 3rd priority, the $1tn infrastructure spending project, will have to wait until next year. As the conservative National Review has warned, this “is a polite way of saying it may not happen at all”.

The issue is simple.  As President Obama discovered in 2009, Congress can only handle one big initiative at a time.

Even though the Democrats also controlled both Houses, Obama was forced to choose between healthcare reform and climate change for his first term, and had to leave climate change for his second term.  President Trump may now be about to learn the same lesson, as he endeavours to pass both healthcare and tax reform. It seems he may have simply misjudged the complexity of the healthcare issue, as he told State Governors last month:

“Nobody knew that healthcare could be so complicated.  Everybody is different, every state is different, and different requirements, but I think we have something that’s going to really be excellent.”

The House currently hopes to agree its own draft healthcare bill within days.  But progress in the Senate – where Republicans hold only 52 of the 100 seats – may well be much slower.  One key issue is that US healthcare costs are already far more expensive than in Switzerland and other major countries, as the Wall Street Journal chart confirms:

□ It costs over a third more to deliver a normal baby in the US than in Switzerland, at nearly $11k
□ A routine knee replacement is also a third more expensive in the US at $28k
□ A heart bypass operation costs more than twice as much in the US at $78k
□ Compared to other advanced economies, US costs are even more out of line

Politically, the position is also likely to become more difficult. AARP, the powerful American Association of Retired People, has urged its 38 million members to oppose the House bill, calling it an “age tax” which would increase premiums by $13k/year for a 64-year old earning $24.5k/year:

“AARP recognizes the magnitude of the upcoming vote on this harmful legislation that creates an age tax, cuts the life of Medicare and gives sweetheart deals to big drug and insurance companies while doing nothing to lower the cost of health care or prescriptions”.

AARP’s move confirms a Foxnews poll showing only a third of voters currently support the House bill, and reinforces a warning from the non-political Congressional Budget Office that it ”would leave 24 million more Americans without health insurance“.  Similarly a Pew poll shows half of all Republicans earning less than $30k/year believe the government has a responsibility to ensure health coverage for all.

Unsurprisingly, therefore, 4 senior Republican senators have already signalled serious opposition to key parts of the Bill, due to its potential to strip people of Medicaid coverage. As they wrote to congressional leaders:

“Unfortunately, the current version of the House bill…provides almost no new flexibility for states, does not ensure the resources necessary to make sure no one is left out, and shifts significant new costs to states.” 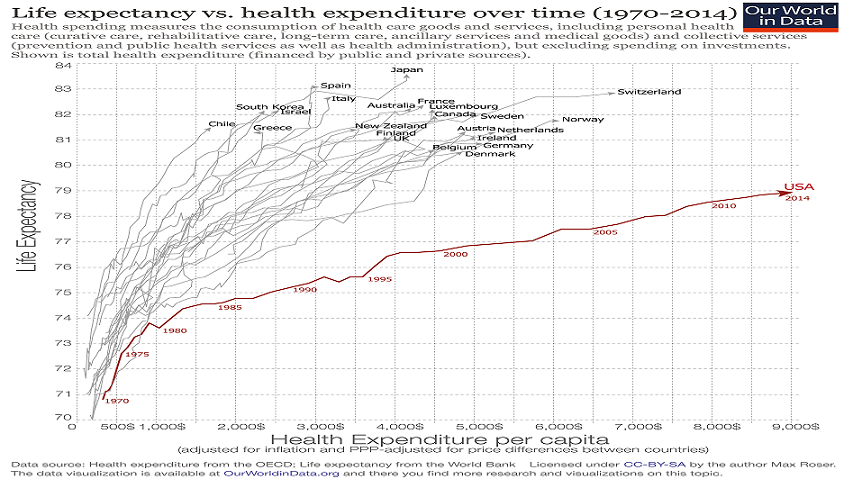 “This is difficult—it’s 18% of the economy. My concern is not with the timeline; my concern is doing it right.”

Boozman’s analysis is confirmed by the Our World in Data chart above, which shows:

 The US currently spends more on healthcare per person than any other country
 Since 1970, its spending has risen around 30-fold, from $300 to $9000 in 2014 (in $1970)
 Switzerland is the next-highest spender at $6750 per person – one third less than the US
 Yet average life expectancy is Switzerland is nearly 83 years compared to 79 years in the US

Life expectancy is, of course, not the only outcome by which to measure healthcare spending. But it is certainly highly important for most people. And as the study’s authors comment:

“All countries in this graph have followed an upward trajectory (life expectancy increased as health expenditure increased), but the U.S. stands out as an exception following a much flatter trajectory; gains in life expectancy from additional health spending in the U.S. were much smaller than in the other high-income countries, particularly since the mid-1980s.”

It is still early days for the Trump administration, but it seems clear that healthcare reform is unlikely to proceed smoothly.  In turn, this makes it unlikely that Congress will pass both tax reform and infrastructure spending this year, disappointing many companies and investors.

Instead, they may well find that President Trump follows President Reagan in leaving tax reform until his second term. After all, even Reagan and his highly-skilled Treasury Secretary, James Baker, found that it took them 2 years to craft the necessary bi-partisan support in Congress that enabled his landmark reform to become law in 1986.