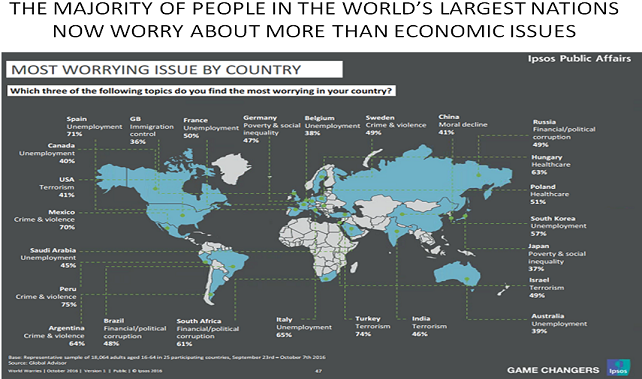 2016 saw the start of the Great Reckoning for the failure of stimulus policies.

Political and social issues are now beginning to dominate the landscape.  As we saw in the UK’s Brexit vote to leave the European Union, voters no longer see economics as the sole issue in elections.  This paradigm shift was then followed by Donald Trump winning the US Presidency and Italy voting against premier Renzi’s constitutional reforms.

Polls confirm this, as the Ipsos MORI chart above shows.  Most people feel the current economic/political/social system is no longer working for them.  Worryingly, given the votes due in 2017, the survey also highlights that French voters (89%), Italians (82%) and Germans (69%) are even more upset than American (63%) and British voters (60%).

Voters are increasingly giving up on the “consensus wisdom” that ignores demographics, and which believes the world can somehow go back to the constant growth seen during the BabyBoomer-led SuperCycle.  As I wrote in August:

“The critical issue is that central banks have been in denial about the changes taking place in demand patterns as a result of ageing populations and falling fertility rates. Their Federal Reserve/US-type forecasting models still assume that raising interest rates will reduce demand, and lowering them will release this pent-up demand. But today’s increasing life expectancy and falling fertility rates are completely changing historical demand patterns. We are no longer in a world where the vast majority of the adult population belongs to the Wealth Creator cohort of those aged 25–54, which dominates consumer spending:

□  Increasing life expectancy means people no longer routinely die around pension age. Instead, a whole New Old generation of people in the low spending, low earning 55+ generation is emerging for the first time in history. The average western BabyBoomer can now expect to live for another 20 years on reaching the age of 65
□  Fertility rates in the developed world have fallen by 40% since 1950. They have also been below replacement levels (2.1 babies per woman) for the past 45 years. Inevitably, therefore, this has reduced the relative numbers of those in today’s Wealth Creator cohort, just as the New Old generation is expanding exponentially

“You cannot print babies” should be the motto hanging on every central bankers’ wall. Unfortunately, it is too late to quickly reverse their demographic myopia. Instead, the Great Unwinding is now set to evolve into the Great Reckoning. Investors, companies and individuals must prepare for heightened levels of volatility, as markets continue their return to being based on the fundamentals of supply and demand, rather than central bank liquidity.”

2017 is therefore likely to be a difficult year, contrary to the optimism of Western stock markets, as the landscape becomes ever more uncertain.  But the world has been through difficult years in the past.  And in time, no doubt, the need to adapt to the positive impact of  today’s demographic changes will become more obvious.  The issue is simple:

Today, Western life expectancy is around 80, and is around 20 years at age 65.  Due to the collapse of fertility rates, a G7 economy such as Italy has nearly as many people in the New Old 55+ cohort as in the Wealth Creator 25 – 54 cohort.  Another new stage therefore needs to be added to our life cycle – whereby we are born, are educated, work, and then retrain in our 50s/60s, before working again until we retire and then die.

We need new leaders, with the vision and common sense required to help explain and manage this New Normal world, so that the benefits of the 100-year life are understood and welcomed.