Skip to content
Home / The world in 2020 – an update on our forecasts in ‘Boom, Gloom and the New Normal’ 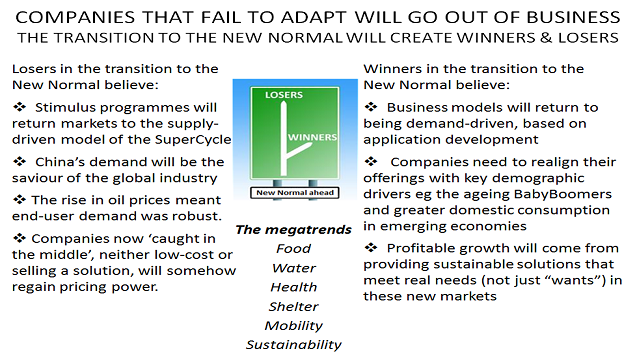 All of us would love to be able to see into the future. And 5 years after the publication of ‘Boom, Gloom and the New Normal: How the Ageing of the Western BabyBoomers is Changing Demand Patterns, Again‘, it seems timely to review its 10 predictions about how the world will look in 2020:

  A major shake-out will have occurred in Western consumer markets.
  Consumers will look for value-for-money and sustainable solutions.
Today.  ”Value for money” retailers and the internet are turning the status quo upside-down.  Affordability is replacing “affordable luxury” as the key driver for revenue and profit growth.  Consumer pressure is also leading brand-owners to pressure companies to produce more sustainably.  The growth of the ‘sharing economy’ highlights how these two developments are creating a world where the physical ownership of products and “stuff” is becoming less important.
  Young and old will focus on ‘needs’ rather than ‘wants’.
Today.  For most families, real incomes (adjusted for inflation) are not increasing as in the past.  This is driving major changes in behaviour.  Younger people are often struggling to repay tuition fees, and to find well-paying jobs, whilst older people are uncomfortably aware they have probably not saved enough to enjoy the retirement they had planned.
  Housing will no longer be seen as an investment.
  Investors will focus on ‘return of capital’ rather than ‘return on capital’.
Today.  This is still ‘work in progress’, but there are plenty of signs that the housing bubble that has existed in many countries is now bursting.  The global rise underway in interest rates will also likely be a catalyst for a major shake-out in investor behaviour as the Great Reckoning continues.
  The term ‘middle-class’ when used in emerging economies will be recognised as having no relevance to Western income levels.
Today.  It is notable that very few analysts or companies now argue that “the growing middle class in China and India” can easily replace any lost demand in the developed world.  And those that do, now usually add that they are referring to those earning over $10k/year – which, of course, is below official poverty levels in Western countries.
  Trade patterns and markets will have become more regional.
Today.  The Doha trade round collapsed last year, and the Trans-Pacific Partnership has collapsed following Donald Trump’s election win.  The planned third major deal, the Trans-Atlantic Trade and Investment Partnership, is also unlikely to proceed.  Trump’s promises to label China a “currency manipulator”, whilst renegotiating or withdrawing from NAFTA and ending the Offshoring Act will reinforce the move away from global to more regional trade patterns.
  Western countries will have increased the retirement age beyond 65 to reduce unsustainable pension liabilities.
Today.  This will be a key issue for the next 5 years, as more and more studies show that the combination of increased life expectancy and lower fertility rates means that current pension schemes are simply unaffordable, with many experts suggesting the issue has reached crisis point.
  Taxation will have been increased to tackle the public debt issue.
Today.  Most countries have raised taxes either directly or indirectly, in order to try and cover their mounting debts.  The most common tactic has been to reduce loopholes – and there has also been a notable public backlash against companies such as Amazon and Facebook that are perceived to artificially reduce their tax contribution.  Trump has, of course, promised to reduce tax rates – and it will be interesting to see how this initiative develops in Congress, where many Republicans are supporters of “balanced budgets”.
  Social unrest will have become a more regular part of the landscape.
Today.  The rise of the Populists is just one example of this, together with growing public concern over the impact of immigration.  Both are inevitable consequences of the slowing economy – and are likely to continue until new political leaders emerge who are focused on solving the issues created by an ageing population.

In ‘Boom, Gloom and the New Normal’, John Richardson and I went on to argue that:

“Companies will need to refocus their creativity and resources on real needs. This will require a renewed focus on basic research. Industry and public service, rather than finance, will need to become the destination of choice for talented people, if the challenges posed by the megatrends are to be solved. Politicians with real vision will need to explain to voters that they can no longer expect all their wants to be met via endless ‘fixes’ of increased debt.

“But doing nothing is not a solution. It will mean we miss the opportunity to create a new wave of global growth from the megatrends. And we will instead end up with even more uncomfortable outcomes.”

Today, these comments also seem to have stood the test of time.  ”Doing nothing” has been tried in the form of ever-increasing stimulus policies, and has been a very expensive failure.  Now, the Great Reckoning for the failure is underway, and seems very likely that “uncomfortable times” lie ahead.

This process will also create Winners and Losers.  Those companies, investors and individuals who focus on the megatrends of Food, Water, Health, Shelter, Mobility and Sustainability seem likely to be the major Winners over the medium and longer-term.