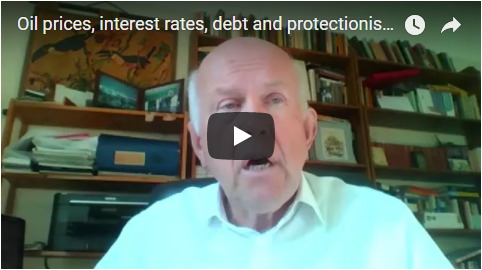 We are living in a strange world. As in 2007 – 2008, financial news continues to be euphoric, yet the general news is increasingly gloomy. As Nobel Prizewinner Richard Thaler, has warned, “We seem to be living in the riskiest moment of our lives, and yet the stock market seems to be napping.” Both views can’t continue to exist alongside each other for ever. Whichever scenario comes out on top in 2018 will have major implications for investors and companies.

It therefore seems prudent to start building scenarios around some of the key risk areas – increased volatility in oil and interest rates, protectionism and the threat to free trade (including Brexit), and political disorder. One key issue is that the range of potential outcomes is widening.

Last year, for example, it was reasonable to use $50/bbl as a Base case forecast for oil prices, and then develop Upside and Downside cases using a $5/bbl swing either way. But today’s rising levels of uncertainty suggests such narrow ranges should instead be regarded as sensitivities rather than scenarios. In 2018, the risks to a $50/bbl Base case appear much larger: 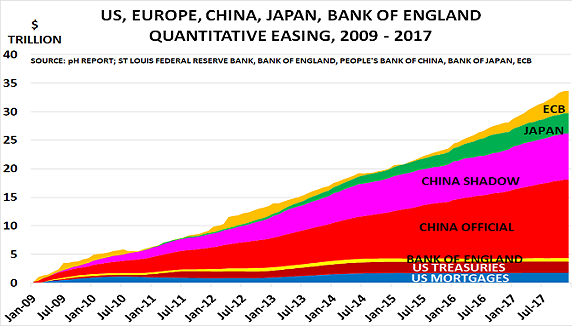 Unfortunately, oil price volatility is not the only risk facing us in 2018. As the chart shows, the potential for a debt crisis triggered by rising interest rates cannot be ignored, given that the current $34tn total of central bank debt is approaching half of global GDP. Most media attention has been on the US Federal Reserve, which is finally moving to raise rates and “normalise” monetary policy. But the real action has been taking place in the emerging markets. 10-year benchmark bond rates have risen by a third in China over the past year to 4%, whilst rates are now at 6% in India, 7.5% in Russia and 10% in Brazil.

An “inflation surprise” could well prove the catalyst for such a reappraisal of market fundamentals. In the past, I have argued that deflation is the likely default outcome for the global economy, given its long-term demographic and demand deficits. But markets tend not to move in straight lines, and 2018 may well bring a temporary inflation spike, as China’s President Xi has clearly decided to tackle the country’s endemic pollution early in his second term. He has already shutdown thousands of polluting companies in many key industries such as steel, metal smelting, cement and coke.

His roadmap is the landmark ‘China 2030’ joint report from the World Bank and China’s National Development and Reform Commission. This argued that China needed to transition:   “From policies that served it so well in the past to ones that address the very different challenges of a very different future”.

But, of course, transitions can be a dangerous time, as China’s central bank chief, Zhou Xiaochuan, highlighted at the 5-yearly Party Congress in October, when warning that China risks a “Minsky Moment“, where lenders and investors suddenly realise they have overpaid for their assets, and all rush together for the exits – as in 2008 in the west.

“Business as usual” is always the most popular strategy, as it means companies and investors don’t face a need to make major changes. But we all know that change is inevitable over time. And at a certain moment, time can seem to literally “stand still” whilst sudden and sometimes traumatic change erupts.

I discuss these issues in more detail in my annual Outlook for 2018.  Please click here to download this, and click here to watch the video interview with ICB deputy editor, Will Beacham.

The post The return of volatility is the key market risk for 2018 appeared first on Chemicals & The Economy.