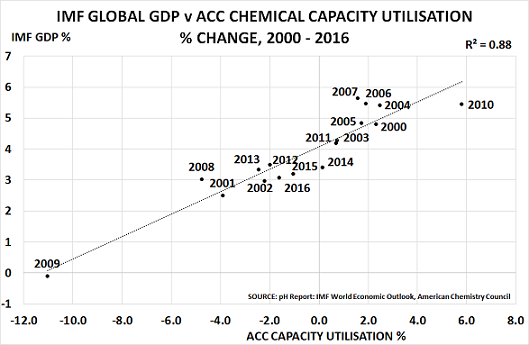 If you want to know what is happening to the global economy, the chemical industry will provide the answers. It has an excellent correlation with IMF data, and also benefits from the fact it has no “political bias”.  It simply tells us what is happening in real-time in the world’s 3rd largest industry.  The chart above confirms the extremely high correlation:

   It shows annual GDP % growth figures from the IMF on the vertical axis from 2000, including the 2016 forecast
   The  horizontal axis shows the annual change in Capacity Utilisation % data for the global chemical industry

The correlation is remarkable at 88%.  Nothing that I have ever seen comes anywhere close to this level of accuracy.

The logic behind the correlation is partly because of the industry’s size.  But it also benefits from its global and application reach. Every country in the world uses relatively large volumes of chemicals, and their applications cover virtually all sectors of the economy, from plastics, energy and agriculture to pharmaceuticals, detergents and textiles. 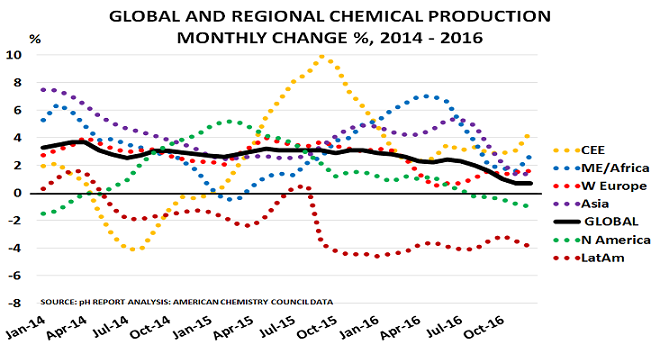 We can also use the data to look forward, given its timeliness, as the ACC also produce detailed reports on the major Regions and countries.  And as the second chart shows, the outlook is unfortunately not good:

This rather negative picture is in complete contrast with the official views of forecasters such as the IMF.   They currently suggest that global growth will rebound from 3.1% in 2016 to 3.4% in 2017, and then move higher.  But sadly, their optimism has been wrong for the past few years, as I noted in my Budget Outlook in October.

They have forecast a similar recovery every year since 2011, but growth has continued to slow.

The problem is that their models ignore the influence of demographics, and today’s ageing populations, on demand. The result, as the deputy chairman of the US Federal Reserve, Stanley Fischer, observed in 2014 is that:

Clearly, it is encouraging that economists such as Andy Haldane at the Bank of England now recognise that demographics “have been under-emphasised for too long“.  We can certainly hope that future forecasts may start to take account of the fact that older people do not consume as much as when they were young.

But in the meantime, it seems wise to take the chemical industry data very seriously.

It is clearly suggesting that the global economy is moving into a downturn. And whilst we must all hope this turns out to be wrong, hope is not a strategy.  We also cannot ignore the major upheavals now underway in economic policy in both the USA and the UK, with President Trump taking office and the UK starting to leave the European Union.

These developments may well produce good results in the longer term.  But in the short-term, they create major uncertainty.  And if we look across the G20 countries – such as China, Russia, Brazil, India, S Africa, Saudi Arabia and Turkey – many are experiencing from similar political and economic uncertainty.