Every New Year starts with optimism about the global economy.  But as Stanley Fischer, then vice chair of the US Federal Reserve, noted back in August 2014:

Will 2018 be any different?  Once again, the IMF and other forecasters have been lining up to tell us the long-awaited “synchronised global recovery” is now underway.  But at the same, they say they are puzzled that the US$ is so weak.  As the Financial Times headline asked:

“Has the US dollar stopped making sense?”

If the global economy was really getting stronger, then the US$ would normally be rising, not falling.  So could it be that the economy is not, actually, seeing the promised recovery?

OIL/COMMODITY PRICE INVENTORY BUILD HAS FOOLED THE EXPERTS, AGAIN
It isn’t hard to discover why the experts have been fooled.  Since June, we have been seeing the usual rise in “apparent demand” that always accompanies major commodity price rises.  Oil, after all, has already risen by 60%.

Contrary to economic theory, companies down the value chains always build inventory in advance of potential price rises.  Typically, this adds about 10% to real demand, equal to an extra month in the year.  Then, when the rally ends, companies destock again and “apparent demand” weakens again.

The two charts above confirm that the rally had nothing to do with a rise in “real demand”:

Their buying has powered the rise in oil prices, based on the free cash being handed out by the central banks, particularly in Europe and Japan, as part of their stimulus programmes. 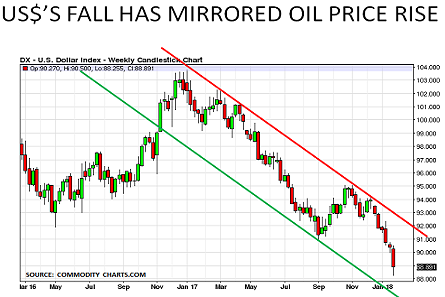 They weren’t only buying oil, of course.  Most major commodities have also rallied.  Oil was particularly dramatic, however, as the funds had held record short positions till June.  Once they began to bet on a rally instead, prices had nowhere to go but up.  1.4bn barrels represents as astonishing 15 days of global oil demand, after all.

What has this to do with the US$, you might ask?  The answer is simply that hedge funds, as the name implies, like to go long in one market whilst going short on another.  And one of their favourite trades is going long (or short) on oil and commodities, whilst doing the opposite on the US$:

The chart highlights the result, showing how the US$’s fall began just as oil/commodity prices began to rise.

COMPANIES HAVE NO CHOICE BUT TO BUILD INVENTORY WHEN COMMODITY PRICES RISE
This pattern has been going on for a long time.  But I have met very few economists or central bankers who recognise it.  They instead argue that markets are always efficient, as one professor told me recently:

“Economists would tend to be skeptical about concepts such as “apparent demand”. Unless this a secret concept (and it doesn’t seem like it is), other investors should also use it, and then the oil price should already reflect it. Thus, there wouldn’t be gains to be made (unless you’re quicker than everyone else or have inside information)…”

But if you were a purchasing manager in the real world, you wouldn’t be sceptical at all.  You would see prices rising for your key raw materials, and you would ask your CFO for some extra cash to build more inventory.  You would know that a rising oil, or iron, or other commodity price will soon push up the prices for your products.

And your CFO would agree, as would the CFOs of all the companies that you supply down the value chain.

So for the last 6 months, everyone who buys oil or other commodity-related products has been busy building as much inventory as they could afford.  In turn, of course, this has made it appear that demand has suddenly begun to recover.  At last, it seems, the “synchronised global recovery” has arrived.

Except, of course, that it hasn’t.  The hedge funds didn’t buy 15 days-worth of oil to use it.  They bought it to speculate, with the OPEC-Russia deal providing the essential “story” to support their buying binge.

THE RISE IN COMMODITY PRICES, AND “APPARENT DEMAND”, IS LIKELY COMING TO AN END
What happens next is, of course, the critical issue.  As we suggested in this month’s pH Report:

“This phenomenon of customers buying forward in advance of oil-price rises goes back to the first Arab Oil Crisis in 1973 – 1974. And yet every time it happens, the industry persuades itself “this time is different”, and that consumers are indeed simply buying to fill real demand. With Brent prices having nearly reached our $75/bbl target, we fear reality will dawn once again when prices stop rising.”

Forecasting, as the humorist Mark Twain noted, “is difficult, particularly about the future”.  But hedge funds aren’t known for being long-term players.  And with refinery maintenance season coming up in March, when oil demand takes a seasonal dip, it would be no surprise if they start to sell off some of their 1.4bn barrels.

No doubt many will also go short again, whilst going long the US$, as they did up to June.

In turn, “apparent demand” will then go into a decline as companies destock all down the value chain, and the US$ will rally again.  By Q3, current optimism over the “synchronised global recovery” will have disappeared.  And Stanley Fischer’s insight will have been proved right, once again.

The post The global economy and the US$ – an alternative view appeared first on Chemicals & The Economy.