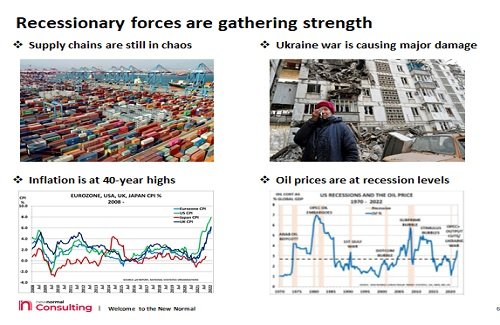 2 years ago, through February and March, we were warning of the pandemic risk. A year ago, we began warning of major inflation risk. Both times, we were right. The consensus disagreed, saying “we didn’t know what we were talking about”.

But we did, because the chemical industry is the best leading indicator for the global economy:

As a result, the industry has an insider’s view of all the areas shown in the chart:

This is why we have been warning that recession is inevitable in recent weeks.  Once again, of course, we have been told “we don’t know what we are talking about”. Yet last week – to everyone else’s “surprise”, the US reported Q1 GDP fell by 1.4%.

“This is noise; not signal. The economy is not falling into recession,” wrote Ian Shepherdson, chief economist at Pantheon Macroeconomics. 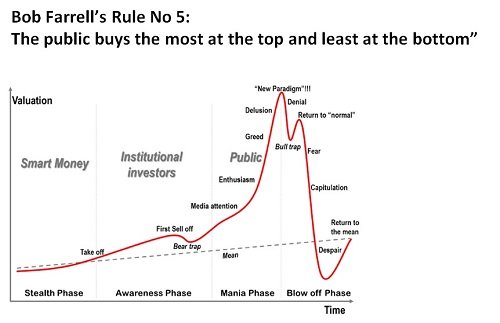 The problem extends to the financial sector. Investors now believe that “all news is good news”:

In other words, central banks have destroyed the role of price discovery, which is the key purpose of a market. Instead, they have been operating under the Bernanke Theory that:

So investors don’t need to analyse companies or industries. They just need to ‘buy on the dips’ before more stimulus arrives, and wait for the profits to roll in.

But as the chart showing the legendary Bob Farell’s Rule No 5 reminds us, this euphoria confirms that we have now reached the top of the market.

Central banks and investors believed stimulus programs had created a “New Paradigm” where asset prices would always increase. Now they are starting to realise that stimulus is irrelevant against the 3 Horsemen of the Apocalypse – China’s continuing battle with the pandemic, Russia’s invasion of Ukraine, and the potential for famine as rising gas/fertilizer prices mean farmers can’t afford to grow their crops or feed their animals.