Skip to content
Home / ‘The chemical industry is screaming “Recession”‘ 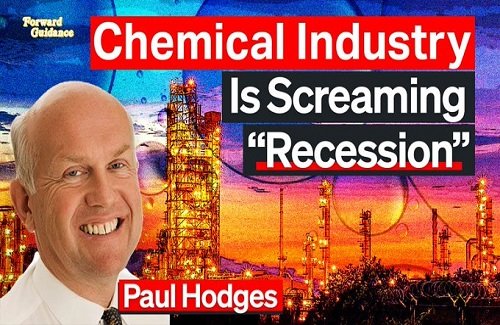 The chemicals industry is the best leading indicator for the global economy. Over the past year, it has correctly warned that policymakers were wrong to suggest inflation was only “transitory”. And more recently, it has argued that the world is facing a major recession, set off by the “The 4 Horsemen of the Apocalypse” – War, Plague, Famine and Inflation.

In my new interview with Forward Guidance, I warn that the chemical industry is in its worst shape since the early 1980s:

After reviewing how and why the chemicals industry is a bellwether for the global economy, Hodges tells Jack Farley how the collapse in chemical prices is a harbinger for a severe global recession. Hodges and Farley also discuss the future of inflation and how it is affected by central banks, geopolitics, and demographics.