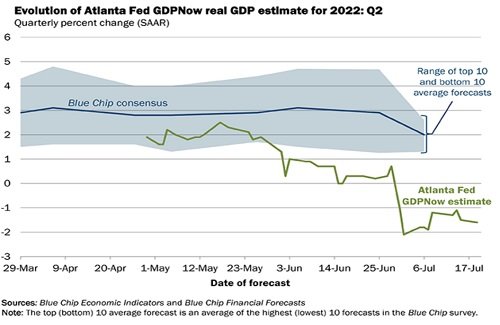 The blog has now been running for 15 years since the first post was written from Thailand at the end of June 2007.  And quite a lot has happened since then:

The past few years have been very difficult for most people. And unfortunately, all the signs are that things will likely get worse, rather than better.

One key issue is that policymakers and commentators prefer to focus on their computer models, and don’t look out of the window to see what is happening in the real world.

The chart from the Atlanta Fed is a good example. It confirms that the USA is now moving into recession. Yet earlier this month, Federal Reserve Governor Chris Waller shrugged off its key message, instead claiming:

“Job creation and the unemployment rate are timely indicators of a recession, more timely than quarterly GDP”

This makes no sense. A recession is an economic event. And the generally accepted definition is that it describes two consecutive quarters of negative growth:

Unfortunately, he is not alone in preferring to ignore reality. The chart also shows the consensus views of “Blue Chip” forecasters. They are also not forecasting a recession.

Again, they are simply ignoring the evidence. The Atlanta Fed work has an excellent track record. Like chemical industry data, it is based on the real world, not some model that someone has dreamt up.

The problem is that the real world is a very messy place. Issues such as geopolitics and demographics require careful analysis. Understanding the detail of how key industries such as energy and chemicals operate is hard.

It’s therefore much easier to stay in the world of theory. 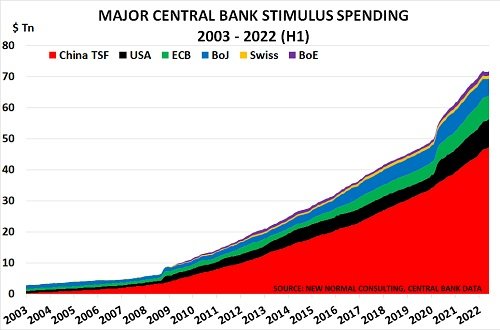 But the legacy of their theory is shown in the chart. They have built up a mountain of debt, now $70tn, which can never be repaid. It would have been much better if policymakers and commentators had instead focused on the real-world evidence highlighted here each week from the chemical industry.

THANK YOU FOR YOUR SUPPORT OVER THE PAST 15 YEARS
It is a great privilege to write the blog, and to be able to meet many readers at speaking events and conferences around the world – both virtually and in person.   Thank you for all your support.