Finally, one of the major Western central banks has agreed that the ageing of the BabyBoomers does indeed have an impact on the economy.  John Fernald of the San Francisco Federal Reserve Bank, wrote in a new paper this week:

“Estimates suggest the new normal for U.S. GDP growth has dropped to between 1½ and 1¾%, noticeably slower than the typical postwar pace. The slowdown stems mainly from demographics and educational attainment. As baby boomers retire, employment growth shrinks. And educational attainment of the workforce has plateaued, reducing its contribution to productivity growth through labor quality. The GDP growth forecast assumes that, apart from these effects, the modest productivity growth is relatively “normal”—in line with its pace for most of the period since 1973.” 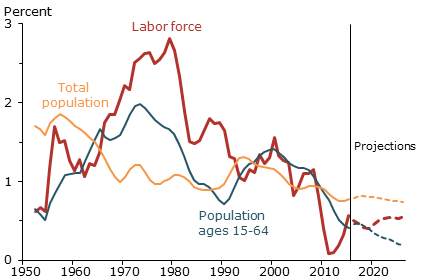 The paper only takes a limited view of the impact, just focusing on the labour market implications, as the second chart shows.  This highlights, exactly as we discussed in Boom, Gloom and the New Normal; How the Western BabyBoomers are Changing Demand Patterns, Again, the enormous impact of the Boomers on the US labour force.  As Fernald rightly notes:

Hopefully, Fernald or his colleagues will now go on to look at the issue of demand patterns.  This is more critical than the labour issue in a consumer-based society such as the USA – where consumption is 70% of GDP.

As I noted in the Financial Times last year, those aged 55+ consume very much less than younger people, and essentially create demographic headwinds for the economy.  They already own most of what they need, and their incomes decline as they enter retirement.  So the Fed’s policy of printing money to boost demand is inevitably going to fail, as we have seen over the past decade.

But, after all these years, it is good that a start has been made, and that someone in a major central bank has recognised that the issue exists.  It is impossible to move forward when everyone is in denial. The fact that Fernald works for the San Francisco Fed may also be a hopeful sign, as this was formerly the home of the current Fed Chair, Janet Yellen.

The problem, of course, as I discuss in this new interview with Will Beacham, Deputy Editor of ICIS Chemical Business, is that much of the damage has already been done.  The chemical industry is the 3rd largest in the world after energy and agriculture, and it now faces major issues of over-capacity at a time of slowing (or perhaps even negative) demand growth.

The UK’s Brexit vote to leave the European Union has been the catalyst for a sudden realisation that all is not well in the global economy.  It seems likely that 2017 will prove to be a difficult year.  I hope that the interview may help you to prepare for this.