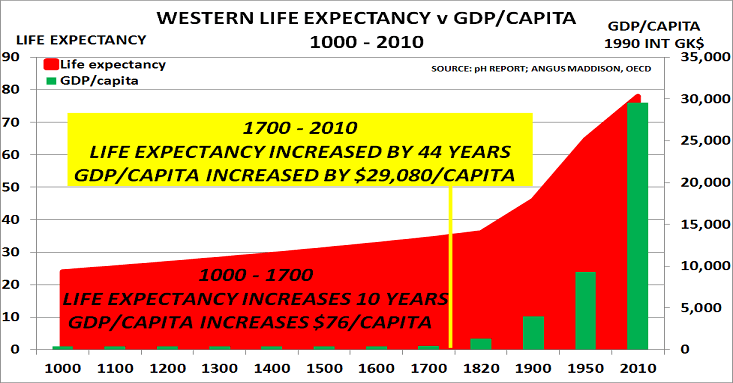 The key event was clearly the Industrial Revolution.  As Andy Haldane, chief economist at the Bank of England, notes in a thought-provoking new paper:

But why did the Industrial Revolution suddenly develop around 1750?  Why had it not occurred earlier, in Ancient Rome or Greece or Egypt, or in China, India or elsewhere?

The chart puts forward my own answer to this critical question, based on Angus Maddison’s pioneering work (especially his “The World Economy“ for the OECD), and shows:

The last 2 centuries have clearly been an extraordinary period in human existence.

SMALLPOX VACCINATION CHANGED THE WORLD
The red line highlights the key enabler of this amazing change – a vast and sudden increase in life expectancy.

The great killer before 1750 was smallpox, with the French writer Voltaire estimating that across Europe “at this time 60% of the population caught smallpox and 20% of the population died of it.  In London, ”In certain districts the infant mortality rate reached 75% of all births whenever epidemics struck”

The development of smallpox vaccination, originally imported from Turkey from 1721, changed this disastrous situation.  British physician Edward Jenner then developed a safe vaccination in 1798.  He has since been credited with having saved more lives than almost anyone else.

Vaccination against smallpox was almost certainly the critical factor in enabling the Industrial Revolution to take place.  It created a virtuous circle, which is still with us today:

  Increased life expectancy meant adults could learn from experience instead of dying at an early age
  Even more importantly, they could pass on this experience to their children via education
  Thus children stopped being seen as ’little adults’ whose role was to work as soon as they could walk
  By 1900, the concept of ‘childhood’ was becoming widely accepted for the first time in history*

These are developments which would have been unimaginable in 1700.

PENSION AGE IS LOWER THAN WHEN PENSIONS BEGAN IN 1889
Along with childhood, another key development as a result of rising life expectancy was the concept of old age.

Since Jenner, we have developed many more vaccinations, as well as other important drugs, and learnt about the value of healthy diets and lifestyles.  We also have chlorine in our drinking water to protect against cholera and typhoid, heating in our homes to protect us in winter, packaging to protect our food against disease, and many other advances.

In turn, these advances led 125 years ago to the introduction by German Chancellor Bismarck of the first-ever first state pension system in 1889 (as we described in chapter 1 of ‘Boom, Gloom and the New Normal’).  This later became the model for many other countries, including the USA.

Today, pension age is often lower than in Bismarck’s time, yet life expectancy is more than 30 years higher.  But as I noted in the Financial Times last year:

“Consumption is 60% of European GDP. And so a growing army of pensioners creates obvious headwinds for growth. They lack the income to stimulate demand themselves, while the spending power of the younger generation is reduced by the need to help pay for their parents’ pensions.

“It is wishful thinking to imagine that Europe’s demographic deficit, created by 50 years of declining birth rates and rising life expectancy, can now be resolved by negative interest rates or the electronic printing of banknotes.

“Most worrying is that the ECB’s high profile provides a figleaf behind which politicians can hide. It allows them to continue to avoid the necessary debate with voters about the need for an immediate rise in the pension age to a more realistic level.

“But at this late stage, no other options exist. If the ECB does not step back, we risk ending up instead with the worst of all possible worlds – deflation plus rising levels of unrepayable debt.”

As we now know, the European Central Bank did not “step back”.

Instead, it has decided to launch a €60bn/month ($67bn) money printing programme next month.  So it is no surprise the Eurozone is now entering deflation and has sharply rising levels of unrepayable debt.

* As US sociologist Viviana Zelizer has shown in Pricing the Priceless Child: The Changing Social Value of Children