China’s housing bubble is not just about Shenzhen.  It is the most obvious sign of problems ahead, as I noted last month.  But as the chart above shows from the Wall Street Journal, total lending to the property sector has rocketed in recent months:

The bubble highlights the growing split between the 2 main factions in China’s Communist Party – the Princelings, led by President Xi, and the Populists led by Premier Li.

The split is set to intensify as the factions prepare for next year’s critical Party meeting in November.  This will decide Politburo membership for the next 5 years – and hence, China’s leadership. Critically, 5 of the current 7 members of the top Standing Committee are due to retire, leaving only Xi and Li as eligible for reappointment. 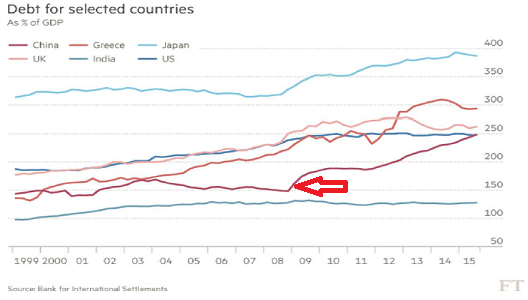 The issue is not just about politics, of course.  Underlying the manoeuvring is an increasingly critical debate over the outlook for China’s economy.  As the second chart shows from the Bank for International Settlements (the central bankers’ bank), China’s debt levels have exploded since 2008.

This was when former President Hu and Premier Wen (both Populists) unleashed the biggest stimulus programme in history, in response to the loss of exports after the start of the Financial Crisis:

    China’s debt was then around 150% of GDP – high, but probably tolerable as most borrowing was going into longer-term projects which would underpin future economic growth
    Today, it is nearly 250%, due to the Populists’ stimulus programmes, which have focused on maintaining employment in the short-term via the creation of a property bubble

The main focus of the debt build-up has been the property sector, where residential buyers have never seen a downturn since the urban market was opened up to private buyers in 1998.  Many suppliers are now increasingly worried that it is being driven by speculative demand.  One told me recently of apartments being built with only minimal insulation, despite local temperatures dropping below zero in the winter.

This is the background to President Xi’s decision to take charge, by telling the government to “control asset bubbles”.  He knows that he has to “take the short-term pain” of restructuring the economy away from property speculation and asset bubbles.  The longer he leaves the Populists in charge, the greater the danger for the economy.

A successful rebalancing of the economy would also bring major benefits for the future, as the IMF noted last week:

“China’s transition has a direct negative impact on global demand through trade, an indirect impact through commodity prices, and an effect on asset prices. However, a well-managed transition will benefit the global economy in the long term, with more sustainable growth in China and a reduction of risks of a disruptive adjustment.”

The question, of course, is whether Xi will succeed, given the entrenched opposition of the Populists and all those who have benefited from the post-2008 mania?  The next 12 months are likely to provide a very bumpy ride – not only for China, but also for the global economy.

WEEKLY MARKET ROUND-UP
My weekly round-up of Benchmark prices since the Great Unwinding began is below, with ICIS pricing comments:
Brent crude oil, down 51%
Naphtha Europe, down 48%.“The European naphtha market has been enjoying exceptionally good demand on the back of high gasoline exports”
Benzene Europe, down 53%. “The market has been inching up and down with crude oil movements recently”
PTA China, down 41%. “Market closed for Golden Week holiday in China”
HDPE US export, down 27%. “Domestic prices for export held steady during the week.”
S&P 500 stock market index, up 10%