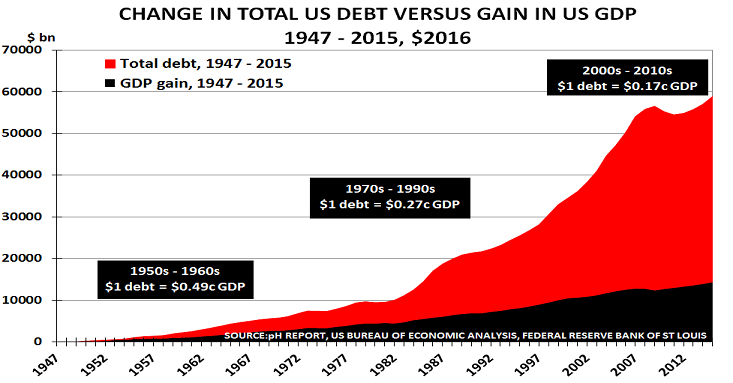 Its déjà vu all over again for the US economy.  Friday’s news of Q2′s weak US GDP growth only confirmed the August 2014 comment by Stanley Fischer, then just appointed deputy Chairman of the US Federal Reserve:

The post-2008 “recovery” has been the slowest since 1949 (when quarterly records began), with growth averaging just 2.1%.  H1 growth is running at just 1%.  But is this really the “surprise” that financial commentators claim?  The chart above suggests it was entirely predicable, as today’s debt mountain creates major headwinds for the US economy:

  It shows the growth in US GDP and total US debt (public and private)* since 1947, when debt records begin
  Both are in real terms, adjusted for inflation, to enable long-term comparisons
  It suggests that we have reached the limit of debt accumulation, and are now entering payback time

The data also suggests that the process of debt accumulation went through 3 different stages:

  1970s – 1990s.  Debt rose to $37tn at the end of 1999, whilst GDP rose to $12tn over the same period.  Every US$1.00 of debt helped to create $0.27c of GDP.
Credit facilities became more widely available as the vast Boomer generation entered the Wealth Creator 25 – 54 age group, which dominates spending and income growth. Lenders rushed to develop new credit facilities for housing, auto and general purpose spending.  And debt became ever-more affordable as interest rates dropped and 2-income households appeared for the first time in history, with Boomer women re-joining the workforce after having children

ECONOMIC FAILURE IS CREATING POLITICAL RISK
We can see the impact of this immense change in a number of key areas:

  The participation rate in the US workforce has dropped to just 62.7%, compared to its 68% peak in 1998.  13m more people would have been working, had the rate still been the same
  The Boomers are becoming uncomfortable aware that the Social Security trust fund will be exhausted in 2029 – just 13 years away – meaning that benefits will have to be cut by 29% in 2030.  And around 2/rds of older Americans rely on Social Security for the majority of their income
  Younger people are also becoming aware that this is likely to lead to a steep increase in their contributions, as the social implications of such a fall in incomes may well make it impossible to implement

None of these problems would exist if central banks had recognised that demographics, not monetary policy, drive economic growth.  But since 2003, they have tried to overcome this demographic deficit by creating ever-increasing amounts of debt.  The subprime disaster in 2008 should have been a warning sign.  Instead, they decided to directly create even more debt, and to encourage its creation in the wider economy via their Zero Interest Rate Policy.

The slowdown in US GDP growth confirms that the policy has completely failed.  In turn, it is no surprise that this economic failure is starting to have major political impact.  A new Pew Research Center survey found that less than a quarter of Americans are “satisfied with the way things are going in this country today”, and 71% are “dissatisfied.”

The survey also highlighted the growing appeal of Donald Trump.  More than three-quarters of voters believe he would “change the way things work in Washington”, whilst less than half believe Hillary Clinton would bring change.

WEEKLY MARKET ROUND-UP
My weekly round-up of Benchmark prices since the Great Unwinding began is below, with ICIS pricing comments:
Brent crude oil, down 58%
Naphtha Europe, down 60%. “European refinery margins have come under increasing downward pressure on an escalation in Atlantic Basin inventory levels. A few European refiners are beginning to cut back on crude processing because of the lower margins
Benzene Europe, down 50%. “The current squeeze on European availability was due to several factors.”
PTA China, down 41%. “Prices taking a battering from dipping upstream energy values in the crude and feedstock paraxylene chain”
HDPE US export, down 33%. “Chinese distributors were unwilling to purchase import cargoes as domestic prices were much lower than import prices.”
S&P 500 stock market index, up 11%
US$ Index, up 17%