Skip to content
Home / Political risk and interest rates rise in US, UK and Japan, as debt and dysfunctionality grow 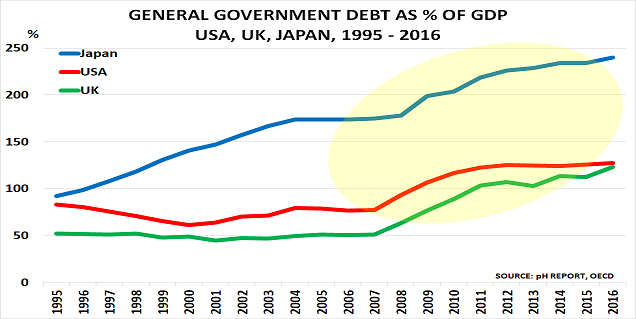 It was almost exactly 10 years ago that then Citibank boss, Chuck Prince, unintentionally highlighted the approach of the subprime crisis with his comment that:

“Since the Great Recession, which is now 8 years old, we’ve been growing at 1.5% – 2% in spite of stupidity and political gridlock….We have become one of the most bureaucratic, confusing, litigious societies on the planet.  It’s almost an embarrassment being an American citizen traveling around the world and listening to the stupid s— we have to deal with in this country. And at one point we all have to get our act together or we won’t do what we’re supposed to [do] for the average Americans.”

The chart above, from OECD data, highlights one key result of the dysfunctionality that Dimon describes:

Debt is essentially just a way of bringing forward demand from the future.  If I can borrow money today, I don’t have to wait till tomorrow to buy what I need.  But, I do then have to pay back the debt – I can’t borrow forever.  So high levels of debt inevitably create major headwinds for future growth. 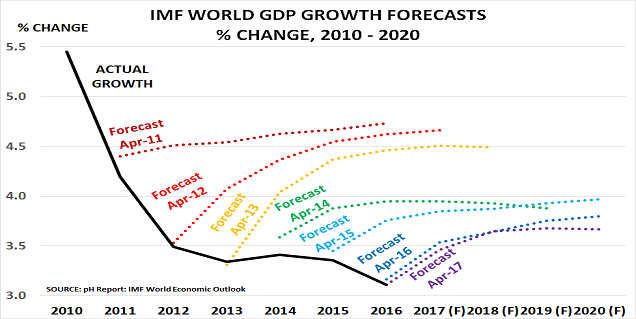 Unfortunately, central banks and their admirers thought this simple rule didn’t apply to them.  They imagined they could print as much money as they liked – and then, magically, all the debt would disappear through a mix of economic growth and inflation.  But as the second chart shows, they were completely wrong:

And meanwhile inflation, which was supposed to help the debt to disappear in real terms, has also failed to take off. US inflation last month was just 1.6%, and is probably now heading lower as oil prices continue to decline.

In turn, this dysfunctionality in economic policy is creating political and social risk:

  The UK has a minority government, which now has to implement the Brexit decision.  This represents the biggest economic, social and political challenge that the UK has faced since World War 2.  But as the former head of the UK civil service warned yesterday:

“The EU has clear negotiating guidelines, while it appears that cabinet members haven’t yet finished negotiating with each other, never mind the EU”. He calls on ministers to “start being honest about the complexity of the challenge. There is no chance all the details will be hammered out in 20 months. We will need a long transition phase and the time needed does not diminish by pretending that this phase is just about ‘implementing’ agreed policies as they will not all be agreed.”

  The US faces similar challenges as President Trump aims to take the country in a completely new direction.  As of Friday, 6 months after the Inauguration, there are still no nominations for 370 of the 564 key Administration positions that require Senate confirmation. And last week, his Secretary of State, Rex Tillerson, highlighted some of the challenges he faces when contrasting his role as ExxonMobil CEO with his new position:

“You own it, you make the decision, and I had a very different organization around me… We had very long-standing, disciplined processes and decision-making — I mean, highly structured — that allows you to accomplish a lot, to accomplish a lot in a very efficient way.  [The US government is] not a highly disciplined organization. Decision-making is fragmented, and sometimes people don’t want to take decisions. Coordination is difficult through the interagency [process]…and in all honesty, we have a president that doesn’t come from the political world either.”

  Then there is Japan, where Premier Abe came to power claiming he would be able to counter the demographic challenges by boosting growth and inflation.  Yet as I noted a year ago, his $1.8tn of stimulus has had no impact on household spending  – and consumer spending is 60% of Japanese GDP.  In fact, 2016 data shows spending down 2% at ¥2.9 million versus 2012, and GDP growth just 1%, whilst inflation at only 0.4% is far below the 2% target.

As in the UK and US, political risk is now rising.  Abe lost the key Tokyo election earlier this month after various scandals. Voter support is below 30%, and two-thirds of voters “now back no party at all” – confirming the growing dysfunctionality in Japanese politics.

WOULD YOU LEND TO A FRIEND WHO RUNS UP DEBT WITH NO CLEAR PLAN TO PAY IT BACK?
So what is going to happen to all the debt built up in these 3 major countries?  There are already worrying signs that some investors are starting to pull back from UK, US and Japanese government bond markets.  Over the past year, almost unnoticed, major moves have taken place in benchmark 10-year rates:

What would happen if these upward moves continue, and perhaps accelerate?  Will investors start to agree with William White, former chief economist of the central bankers’ bank (Bank for International Settlements), that:

“To put it in a nutshell, if it’s a debt problem we face and a problem of insolvency, it cannot be solved by central banks through simply printing the money. We can deal with illiquidity problems, but the central banks can’t deal with insolvency problems”.

White was one of the few to warn of the subprime crisis, and it seems highly likely he is right to warn again today.