Skip to content
Home / Metastable markets at risk from impact of US, UK political stalemate 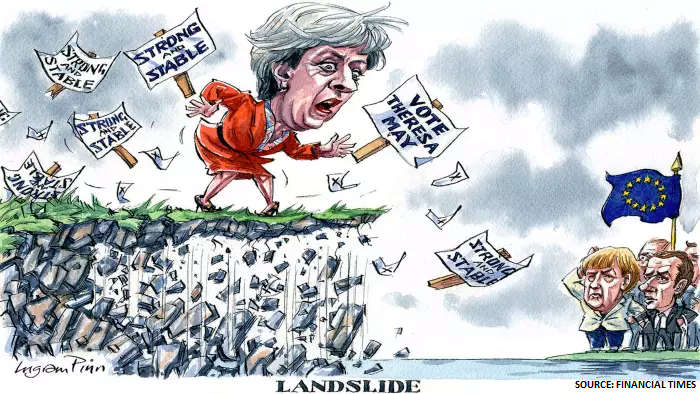 We are living in very uncertain times, where the only certainty is that there is no “business as usual” option for the future.  One sign of this is that the extraordinary has become ordinary :

□   The FBI appear convinced Russia’s government targeted last year’s US elections: US President Trump and his former FBI head have since accused the other of lying about the issue
□   UK premier Theresa May has just lost an election she had expected to win by a landslide, and is now engaged in a probably futile attempt to remain in power

We have not seen political chaos on this scale since the 1970s.  Yet unlike the 1970s, markets continue to bury their heads in the sand, in the mistaken belief that the central banks will always be able to ensure that prices never fall.

The problem is two-fold:

□   Most investors and company executives grew up during the BabyBoomer-led economic SuperCycle. They have never known a world where growth disappointed, and where political stalemate led to major economic crises
□   Central bank policies have made the underlying situation worse, not better.  They have artificially boosted the value of financial assets (stocks, houses and commodities) whilst creating vast amounts of debt that can never be repaid

Even worse is that a generational divide has opened up in both the US and UK, as most assets are owned by older people.  Younger people instead find themselves burdened by high levels of student debt, and facing a future where weekly earnings are no longer rising in inflation-adjusted terms.

KEY AREAS OF TRUMP’S AGENDA HAVE FAILED TO MOVE FORWARD
It was clear when President Trump came to power that we had reached the end of “business as usual“. He immediately set about creating major disruption in global trade patterns:

□   He cancelled the TransPacific Partnership which would have linked 11 Pacific countries with the USA
□   He also notified Congress of his intention to renegotiate the North American Free Trade Agreement
□   More recently, he announced his intention to withdraw from the Paris Climate Change Agreement, COP-21

Unsurprisingly, push-back is now developing against these dramatic changes.  On COP-21, powerful opponents such as Michael Bloomberg have begun to co-ordinate moves by several key states, cities and companies to instead “do everything that America would have done if it stayed committed” to the Agreement.

Trump’s other major policy move – the lifting of restrictions on the development of fossil fuels – is also seeing push-back, this time from the markets.  Oil prices are already back to pre-election levels, and are likely to go much lower as new US production comes online.

Trump’s position is also weakened by his failure to recruit a large team of highly skilled people, capable of promoting his agenda with all the relevant stakeholders.  So far, he has only nominated 83 people to fill the 558 key positions in his Administration that require Senate confirmation.  In the Dept of Commerce, only 7 of the 21 key positions have been nominated; in Energy, only 3 out of 22; in Treasury, only 10 out of 28.

As a result, the US now seems likely to face political stalemate.  Trump clearly has a mandate to push through his changes. But every day that passes makes it less likely that his key policy objectives – healthcare/tax reform and infrastructure spending – can be implemented.

The problem is simple – every new President has only a short “window of opportunity” to implement his policies, as their post-election momentum soon starts to disappear. By Labor Day (4 September), legislators are refocusing on next year’s mid-term elections. Their ability to make the compromises necessary for major legislation soon disappears, once the “losers” from any change make their voices heard.

MAY’S ELECTION FAILURE CREATES AN OPENING FOR CORBYN
Last Thursday’s election result confirmed my analysis back in October that:

“In the UK, where most pundits regard the populist Labour Party leader, Jeremy Corbyn, as unelectable due to his radical socialist and pacifist  agenda, it would only take a breakdown in the Brexit negotiations for his chances of gaining power to rapidly improve.”

The breakdown duly occurred with May’s decision to adopt a “hard Brexit”.  May, like Trump, relied on a small group of advisers and failed to recruit the team needed to push through her ambitious agenda of total EU withdrawal.  The result, as I noted last month, was that the “UK risked crashing out of EU after election without a trade deal“.

This stance created fertile ground for Corbyn as he mobilised large numbers of young people to vote for the first time. They quickly realised that their future was at stake, given that the Brexit negotiations are due to start on June 19.

May will clearly try to hang on – but she is unlikely to succeed for very long.  Corbyn’s move to propose giving EU citizens full rights after Brexit could easily be the straw that brings May down, as leading Tories such as Ken Clarke and others would no doubt vote with him.

As in the US, political stalemate is likely to develop.  Brexiteers no longer have a mandate for a “hard Brexit”, where the UK would leave the EU without access to the Single Market and Customs Union.  But neither can Remainers easily reverse the formal EU exit process, which will see the UK leave the EU by March 2019.

MARKETS ARE IN A METASTABLE STATE
Markets cannot continue to ignore these developments for much longer.  They are in what scientists would call a metastable state.  The detail of the next move is uncertain – and the only certainty is that the status quo is untenable:

□   There is no going back to the SuperCycle: the Western world faces a demand deficit due to its ageing population
□   Equally, there is no obvious and easy route forward, until policymakers focus on the “impact of the 100-year life”

As a result, markets will soon be forced to rediscover the negative impact of political stalemate.  Probably Winston Churchill’s famous comment after the Allies’ victory at El Alamein in 1942 best describes the position: