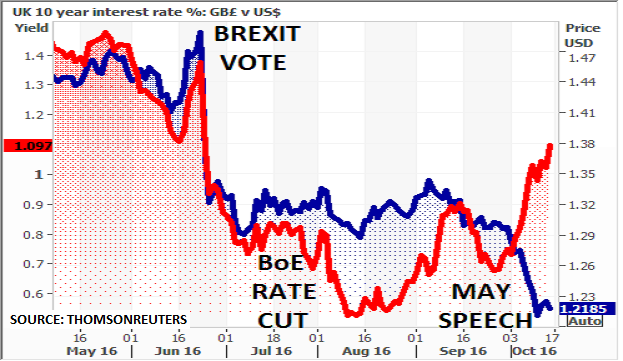 Last week as the BBC reported, Bank of England Governor, Mark Carney, explained to an audience in Birmingham that the Bank had saved the UK economy after the Brexit vote in June:

“Between 400,000 and 500,000 jobs could have been at risk if the Bank had not taken action after the referendum, he said.  ”We are willing to tolerate a bit of an overshoot [on inflation] to avoid unnecessary unemployment. We moved interest rates down to support the economy.””

Imagine that!  How wonderful, that one man and his Monetary Policy Committee could save “between 400,000 and 500,000 jobs“, just with a speech, an interest rate cut, and more money-printing.

There was only one problem, as the chart above shows.  Markets didn’t applaud by buying more UK government bonds and so reducing interest rates.  They sold off again (red line)*, panicked by the idea that debt was rising whilst growth was slowing and the currency falling (blue line):

  Interest rates had fallen after the June 23 vote, as traders bet that Carney would add more stimulus
  They fell to 1.09% on June 24, and then to 0.65% after his August confirmation that this was underway
  But then, in a departure from the Bank’s script, they bottomed at 0.53% a week later, and began to rise
  Premier Theresa May caused further alarm at the Conservative Conference, suggesting Brexit might be for real
  They closed on Friday after Carney’s speech at 1.1% – nearly twice the August level, and above the June 24 close

Over the weekend, traders were then able to read the previously unpublished comments of Foreign Secretary, Boris Johnson, on the implications of a Brexit vote:

“There are some big questions that the “out” side need to answer. Almost everyone expects there to be some sort of economic shock as a result of a Brexit. How big would it be? I am sure that the doomsters are exaggerating the fallout — but are they completely wrong? And how can we know?

“And then there is the worry about Scotland, and the possibility that an English-only “leave” vote could lead to the break-up of the union. There is the Putin factor: we don’t want to do anything to encourage more shirtless swaggering from the Russian leader, not in the Middle East, not anywhere.

“And then there is the whole geostrategic anxiety. Britain is a great nation, a global force for good. It is surely a boon for the world and for Europe that she should be intimately engaged in the EU. This is a market on our doorstep, ready for further exploitation by British firms: the membership fee seems rather small for all that access.

“Why are we so determined to turn our back on it?”

Its just a pity that it was left until now for Johnson’s “alternative view” on Brexit to emerge.  It confirms my fear immediately after the Brexit vote, that Brexit will prove to be:

“The canary in the coalmine.  It is the equivalent of the “Bear Stearns collapse” in March 2008, ahead of the financial crisis.    And as I have argued for some time, the global economy is in far worse shape today than in 2008, due to the debt created by the world’s major central banks.”

The sad conclusion is that the world is now likely to suffer some very difficult years.  Markets will have to relearn their true role of price discovery, based on supply and demand fundamentals, rather than central bank money-printing.  On Wednesday, I will look at some of the wider implications for global interest rates.

WEEKLY MARKET ROUND-UP
My weekly round-up of Benchmark prices since the Great Unwinding began is below, with ICIS pricing comments:
Brent crude oil, down 50%
Naphtha Europe, down 48%.“Petrochemical demand high despite margin drop”
Benzene Europe, down 53%. “Prices have ebbed and flowed with the crude oil/energy market as well as market developments in the US”
PTA China, down 40%. “Bottle chip producers in China have been staying away from purchasing import cargoes, with traders describing demand for PET producers as ‘soft”
HDPE US export, down 31%. “The depreciation of Chinese Yuan dampened buying interest for import cargoes”
S&P 500 stock market index, up 9%