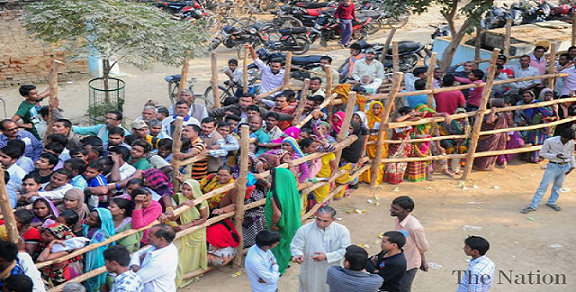 It is now just over a month since India introduced the biggest currency reform the world has ever seen.  In a country of 1.3bn people, it abolished the 2 main banknotes (worth $207bn), that accounted for 86% of all cash in circulation.

  Reducing the role of the black market (thought to be around 20% of GDP)
  Expanding the number of taxpayers, as currently only 1% of the population pay tax
  Cutting back the availability of funds for terrorists
  Moving India towards a digital economy

The problem is that currency reforms are very complex.  The euro changeover took 3 years to organise, and covered less than half of India’s population.  It was also done publicly, so potential problems could be spotted and solved.

By contrast, India’s reform had to be done in secret.  And unlike the euro area, India is a very poor country, with median income of just $616.  Cash is therefore critically important to individuals, and accounts for 98% of all consumer transactions:  600m people have no access to bank accounts and there are just 18 ATMs per 100k people.

As the Governor of State Bank of India warned in a report when rumours of the plan began to circulate in April:

“If demonetization is being contemplated, a road map needs to be created. It needs to be done in steps and be balanced with creation of necessary electronic and digital infrastructure in the country, coupled with creating awareness and financial literacy for ensuring that the man on the street is not put to undue hardship,” the report said.

Going into the advantages of demonetization, the report said that demonetizing Rs 500 and Rs 1,000 currency notes will bring a huge amount of the funds kept in these denominations into the banking channels and will facilitate a reduction in domestic black money transactions.  But this would also be a headache when it comes to logistics.

“At the branch level, the cost of handling cash would zoom and there would be complete chaos as the funds kept in these denominations will be flushed into the banking channels,” the report said. The report goes on to say that introduction of a Rs 5,000 note will also not solve the problem and would continue to result in ATMs running dry several times a day.”

Sadly, it seems that the Bank’s warnings have proved all too accurate:

  As of yesterday, the amount of valid currency in circulation is only 42% of the pre-reform amount, as the printing presses only began rolling in late October
  Tens of millions of Indians have been standing in bank lines to exchange old notes for new 500 or 2000 rupee notes
  One problem is that the new notes are smaller, which means all ATMs have first to be reconfigured – which is estimated to take 45 days
  Shortages have been widespread, with the Financial Times’ correspondent reporting a 3 week wait for her local ATMs to start issuing the new notes
  The drive towards digitalisation is also hampered as India has just 1.5m point-of-sale (POS) terminals – 1 for every 1785 people, compared to 1 for every 60 people in China
  The government has promised to supply 2 POS terminals to every village of 10k people – but there are 100k villages of this size and it will likely take up to 6 months for them to arrive as they will have to ordered from China
  The shortage of cash has already forced the government to allow farmers (who are mostly very poor) to use the banned 500 rupee notes to buy seeds for the winter sowing season

Clearly ordinary Indians have suffered the most from the poor execution of the planned reform.  But the economy must also be suffering, given that cash is around 12% – 14% of GDP (compared to just 5% in most large economies).

  The Japan Times reports:  “Consumer goods sales are reported to have dropped by one-third. Trucks are at a standstill. Farmers have difficulty buying seeds and fertilizer and selling crops and perishable produce. The fishing industry is close to collapse. Few villages have ATMs and having to trek into cities and wait in line for hours means the loss of daily wages — as it does for the rickshaw drivers, street vendors, domestic workers and daily laborers in the cities. The construction industry has been badly hit with significant wage implications for its casual workforce.”

  The Financial Times reports:  ”Gaurav Daga, owner of Oswal Cable Products, imports plastic polymers used to manufacture everything from industrial cables to shoes to automobile components. His clients run across the gamut of India’s manufacturing sector, from large national brands and their big suppliers to small industries.

“His sales have dropped by half since Mr Modi announced the ban on the use of high denomination banknotes, and imposed cash rationing. Several of his big customers — large, national shoe companies with bank accounts and big workforces — have been forced to suspend production, due to their inability to pay their workforce — rural migrants, with neither bank accounts nor smartphones.

“They don’t have money to give to their labourers,” Mr Daga said. “They have it in a bank but they don’t have currency. And you cannot open bank accounts for everyone overnight.”

  The Economist reports that India’s rural economy is “seizing up“:  “In the second week of the (cash) drought, deliveries of rice to rural wholesale markets were 61% below prior levels. Soyabeans were 77% down and maize 29%. Prices have also collapsed. In Bihar, Scroll’s reporters found desperate farmers selling cauliflower for 1 rupee ($0.01) a kilo, a twelfth of the prior price”.

  Wood Mackenzie reports that in petrochemicals, “Several producers are exporting chemicals due to lack of domestic demand, and running out of storage/warehouse space. The cash crunch will hit India’s automotive and real estate markets hard….Even if everything goes according to plan and there is sufficient cash available by the end of 2016, we expect impact of demonetisation to be a slowdown for a few quarters, at least.”

  India’s Automotive Association has reported:  ”2016 Sales Temporarily Disrupted Due to Demonetization”.  And oil demand is also being impacted.  November volumes were strong, as the government issued a waiver to allow people to stock up using their old banknotes.  But December and Q1 are likely to be weaker according to Essar Oil’s CEO.  This is very bad news for OPEC, as India is key to global oil demand growth.

Premier Modi has promised  the problems will start to be resolved by the end of December, 50 days after the reform began. We must all hope he is right.