Skip to content
Home / If “Brexit means Brexit”, what does Brexit mean? 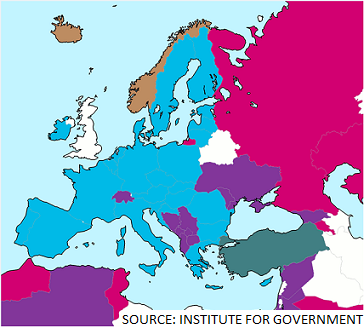 The summer is over, and the UK government now has the job of deciding its objectives for the Brexit negotiations. These, like all major negotiations, will no doubt be long and difficult.  They will also inevitably create major uncertainty for companies, investors and individuals as they progress.

I have personally led major negotiations in a wide variety of cultures, and also participated in them as a team member. So I have a reasonable idea of the challenges that the Brexit negotiations will create.  But they are unique in their complexity, and in their political nature:

□  If one takes the chemical industry as an example, tariff negotiation is only a part of the discussion – rules and regulations around environmental, health and safety issues will probably end up being far more important
□  Political developments will create further complexity – Italy has a referendum this year, whilst elections are due next year in major EU countries including Germany and France, and the USA will have a new Administration

The UK’s new premier, Theresa May, has stated that “Brexit means Brexit”.  But she is also well aware there are at least 5 major potential options for a Brexit agreement, as the authoritative Institute for Government has outlined:

□  ”Membership of the European Economic Area (EEA): the ‘Norway model’. This offers almost complete access to the Single Market in goods and services, with some restrictions on agricultural and fisheries products. In return for this access, EEA members must accept free movement of people. They make a significant contribution to the EU budget and must accept all EU laws and regulations related to the Single Market, with minimal influence over their content.
□  ”Membership of the European Free Trade Agreement (EFTA) plus bilateral deals: the ‘Swiss model’. EFTA provides access to the Single Market in all non-agricultural goods. Switzerland has added a series of bilateral agreements allowing for trade in some services, and also has a treaty accepting free movement of people. Switzerland contributes to the EU budget to cover the costs of programmes it participates in. It must adapt domestic legislation to meet EU laws in the areas of the Single Market that it participates in, and has no formal influence over those laws.
□  ”A customs union.  Members of a customs union agree to trade agreed categories of goods (for example, industrial or agricultural) between themselves without applying any tariffs. If the UK were to take this path and agree a customs union with the EU, it would not face tariffs in exporting goods to the EU, but would be obliged to adopt existing and future EU rules relating to the regulation of goods. Customs unions are bespoke, with different versions covering different types of goods… An important feature of a customs union is that members apply a common external tariff to all third parties (unlike an FTA, where members can have their own tariff policy with other countries). The EU operates an advanced form of a customs union in that the common tariff is then pooled across the EU.
□  ”A bilateral free trade agreement, such as the Canadian or Singaporean models. Both these bilateral agreements, when ratified, will offer almost complete access to the Single Market in goods, but less access to the market in services, with some sectors excluded. Neither agreement requires free movement of people. Exporters must comply with EU rules and regulations when exporting to the Single Market, and will have no influence over these rules and regulations. Before the UK could sign an FTA with the EU (or with any other entity), it will probably need to have its WTO arrangements set out – potential FTA partners need to know what terms the UK is offering the rest of the world, before they can know what ‘preferential’ terms to seek for themselves.
□  ”Membership of the World Trade Organization (WTO). This would offer the most complete break with the EU. As a WTO member, Britain would be able to negotiate free trade agreements with other members, including the EU. In the period before these agreements were put in place, the UK would have to offer equal ‘most favoured nation’ status and equal tariffs to all countries wishing to trade with it. UK exports to the EU would also face the EU’s external tariff.”

PROTECTIONISM IS RISING AROUND THE WORLD

The government will now have to decide which of these options to pursue.  And at the same time, it is uncomfortably aware that trade deals, as such, are becoming very unpopular in many major countries, as the above chart from Global Trade Alert confirms.  Some even suggest we may be moving away from trade agreements to trade wars.

Evidence for this paradigm shift can be seen in the fact that last December’s WTO negotiations ended in failure, whilst risks are rising over ratification of the proposed TPP deal between 12 Pacific Rim countries.  Pressure to abandon the proposed TTIP deal between the EU and NAFTA is also rising.

Another critical fact is that all negotiations are about compromise – if the UK wants control over immigration, for example, this will limit its negotiating options with countries that currently have relatively open access to the UK – such as China, the USA, India and others, as well as the EU.

This “fact of life” is, after all, why recent Conservative and Labour governments never implemented major cutbacks. Reducing immigration would have important “second-order effects”, as three-quarters of immigrants move to the UK for work or study.  Universities, for example, often depend on fee income from foreign students for their finances, whilst the National Health Service relies on its 57,000 foreign workers.  As the BBC noted before the Brexit vote:

“The UK isn’t bound to accept non-EU migrants by any international treaties, but nevertheless let 277,000 of them move over last year alone.”

Individual industries also risk finding themselves being made part of “trade-offs” to obtain benefits for another industry. The lobbying power of the financial services industry might, for example, mean that it is allowed to keep some form of passporting rights (to sell its services into the EU after Brexit).  In exchange, the UK might have to accept greater restrictions on another industry.

The conclusion is clear.  Anyone who thinks they know what is going to happen with Brexit, simply doesn’t understand the key issues.  And anyone who thinks that Brexit has nothing to do with them or their business, may well have a surprise ahead of them.