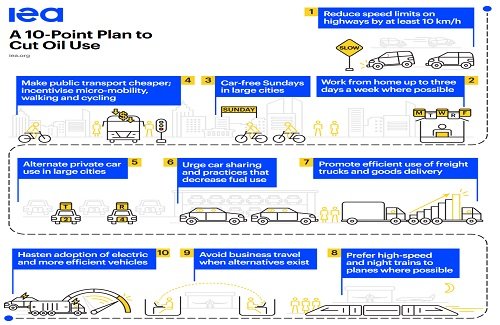 Europe and the USA are now in a ‘proxy war’ with Russia after its invasion of Ukraine. We can all hope that it ends quickly, without further bloodshed on both sides. But hope is not a strategy. And now the IEA, (the Western world’s energy watchdog), has issued the first of what may be a series of 10-Point Plans to cut oil demand.

The problem with wars is that they quickly assume a life of their own. Once the military are in charge – and they have to be, once war is declared – their focus is on winning.  If things don’t go well, they don’t therefore think of giving up. They simply demand more resources and increase the pressure.

Both Ukraine and Russia are already in this mode. The generals are in charge on the battlefield, and their political masters are busy organising reinforcements:

We should now expect the war to move into a second, more attritional, phase. In turn, the risks of a wider engagement will rise. Putin has, after all, already threatened the use of tactical nuclear weapons, and to target Western convoys taking weapons into Ukraine.

If this happened, then the pressure for NATO to enforce a “no-fly zone” in Ukraine would increase – and the risk of a direct military engagement between Russia and NATO forces. As a European Union official has warned:

“The longer the Ukrainians hold out, the more they can withstand attacks on buildings, the more likely it is the Russians will either use chemical weapons or targeted, limited nuclear weapons.”

We can, of course, all hope that peace talks will succeed. But the International Energy Agency is taking no chances, and calling for an immediate 2.7mbd saving in oil demand via the steps described in the chart:

ACCELERATING THE USE OF SUSTAINABLE ENERGY

The IEA also emphasises that the war highlights the need to move decisively away from the use of fossil fuels. Its plan to achieve Net Zero targets set out the direction of travel last May. Since then, OPEC+ decided to reduce output to support prices – which they have done very successfully.

So geopolitical, economic and sustainability goals are all pointing in the same direction as the IEA notes:

These are difficult times, and there is no guarantee that they may not get worse. But they also remind us of the critical need to move beyond the Age of Oil, and develop more sustainable energy resources for the future.