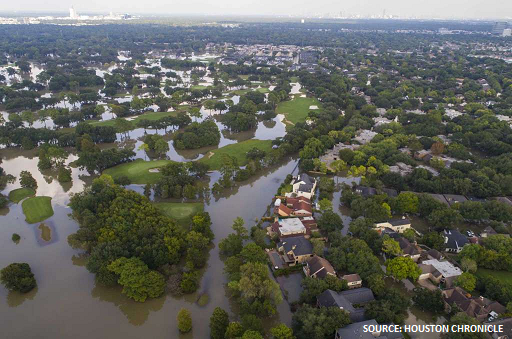 “By Monday, the third straight day of flooding, the aftermath of Hurricane Harvey had left much of the region underwater, and the city of Houston looked like a sea dotted by small islands.  ’This event is unprecedented,’ the National Weather Service tweeted. ‘All impacts are unknown and beyond anything experienced.’”

This summary from the New York Times gives some idea of the immensity of the storm that struck large parts of Texas/Louisiana last week, including the 4th largest city in the US.  And this was before the second stage of the storm.

I worked in Houston for 2 years, living alongside the Buffalo Bayou which flooded so spectacularly last week.  The photo above from the Houston Chronicle shows the area around our former home on Saturday, still surrounded by water.  Today, as the rest of America celebrates the Labor Day holiday, the devastated areas in Texas and Louisiana will be starting to count the cost of rebuilding their lives and starting out anew:

  Some parts of the Houston economy will recover remarkably quickly. It is a place where people aim to get things done, and don’t just sit around waiting for others to do the heavy lifting
  But as Texas Governor Abbott has warned, Harvey is “one of the largest disasters America has ever faced. We need to recognize it will be a new normal, a new and different normal for this entire region.”

The key issue is that the Houston metro area alone is larger in size than the economies of Sweden or Poland.  And as Harris County Flood Control District meteorologist Jeff Lindner tweeted:

Already the costs are mounting.  Abbott’s current estimate is that Federal funding needs alone will be “far in excess of $125bn“, easily topping the costs of 2005′s Hurricane Katrina in New Orleans.  And, of course, that does not include the cost, and pain, suffered by the majority of homeowners – who have no flood insurance – or the one-third of auto owners who don’t have comprehensive insurance. They will likely receive nothing towards the costs of cleaning up.

SOME PARTS OF THE ECONOMY HAVE THE POTENTIAL FOR A QUICK RECOVERY
Companies owning the large refineries and petrochemical plants in the affected region have all invested in the maximum amount of flood protection following Katrina, when some were offline for 18 months

  Oil platforms in the Gulf of Mexico are used to hurricanes and are already coming back – Reuters reports that only around 6% of production is still offline, down from a peak of 25% at the height of the storm
  It is hard currently to estimate the impact on shale oil/gas output in the Eagle Ford basin, but the Oil & Gas Journal reports that 300 – 500 kb/d of oil production is shut-in, and 3bcf/d of gas production
  ExxonMobil is now restarting the country’s second-biggest refinery at Baytown, and Phillips 66 and Valero are also restarting some operations, whilst ICIS reports that a number of major petrochemical plants are now being inspected in the expectation that they can soon be restarted

Encouragingly also, it seems that insurance companies are planning to speed up inspections of flooded properties by using drone technology, which should help to process claims more quickly.  Loss adjusters using drones can inspect 3 homes an hour, compared to the hour taken to inspect on roof manually.  But even Farmers Insurance, one of the top Texas insurers, only has 7 drones available – and has already received over 14000 claims.

RECOVERY FOR MOST PEOPLE AND BUSINESSES WILL TAKE MUCH LONGER
For the 45 or more people who have died in the floods, there will be no recovery.

Among the living, 1 million people have been displaced and up to 500k cars destroyed.  481k people have so far requested housing assistance and 25% of Houston’s schools have suffered severe or extensive flood damage.

These alarming statistics highlight why clean-up after Harvey will take a long time.  Basic services such as water and sewage are massively contaminated, with residents being told to boil water in many areas.  The “hundreds of thousands of people across the 38 Texas counties affected by Harvey” using their own wells are particularly at risk.

And as the New York Times adds:

“Flooded sewers are stoking fears of cholera, typhoid and other infectious diseases. Runoff from the city’s sprawling petroleum and chemicals complex contains any number of hazardous compounds. Lead, arsenic and other toxic and carcinogenic elements may be leaching from some two dozen Superfund sites in the Houston area”

FEW IN HOUSTON HAVE FLOOD INSURANCE 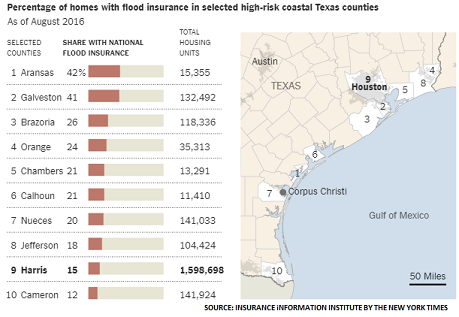 Then there is the issue that, as the chart from the New York Times shows, most of those affected by Harvey don’t have home insurance policies that cover flood damage.  Similarly, a survey in April by insurer Aon found that:

“Less than one-sixth of homes in Harris County, Texas, whose county seat is Houston, currently have active National Flood Insurance Program policies. The county has about 1.8 million housing units.”

As the Associated Press adds:

“Experts say another reason for lack of coverage in the Houston area was that the last big storm, Tropical Storm Allison, was 16 years ago. As a result, people had stopped worrying and decided to use money they would have spent for insurance premiums on other items.”

Even those with insurance will get hit by the low levels of coverage – just $250k for a house and $100k for contents. Businesses carrying insurance also face problems, according to the Wall Street Journal, as they depend on the same Federal insurance scheme, which:

“Was primarily designed for homeowners and has had few updates since the 1970s. Standard protections for small businesses, including costs of business interruption and significant disaster preparation, aren’t covered, and maximum payouts for damages haven’t risen since 1994.

The maximum coverage for business property is $500k, and the same cap applies to equipment and other contents, far below many businesses’ needs.  And even those with insurance find it difficult to claim, according to a study by the University of Pennsylvania and the Federal Reserve Bank of New York after Hurricane Sandy in 2012:

“More than half of small businesses in New York, New Jersey and Connecticut that had flood insurance and suffered damages received no insurance payout. Another 31% recouped only some of their losses.”

Auto insurance is a similar story. Only those with comprehensive auto insurance are likely to be covered for their loss – and even then, people will still suffer deductions for depreciation.  According to the Insurance Council of Texas:

“15% of motorists have no car insurance, and of those who do, (only) 75% have comprehensive insurance. That leaves a lot of car owners without any protection.”

In other words, around 1/3rd of car owners probably have no insurance cover against which to claim for flood damage.

HARVEY’S IMPACT WILL BE LONG-TERM
It is clearly too early, with flood waters still rising in some areas, to be definitive about the implications of Hurricane Harvey for Houston and the affected areas in Texas and Louisiana.

Of course there are supply shortages today, and the task of replacement will created new demand for housing and autos.  But over the medium to longer term, 3 key impacts seem likely to occur:

  It will take time for the supply of oil, gas, gasoline and other refinery products, petrochemicals and polymers to fully recover.  There will inevitably also be some short-term shortages in some value chains. But within 1 – 3 months, most if not all of the major plants will probably be back online
  It will take a lot longer for most people affected by Harvey to recover their losses.  Some may never be able to do this, especially if they have no insurance to cover their flooded house or car.  And those working in the gig economy have little fall-back when their employers have no need for their services
  The US economy will also be impacted, as Slate magazine warned a week ago, even before the full magnitude of the catastrophe became apparent:

“For the U.S. economy to lose Houston for a couple of weeks is a human disaster—and an economic disaster, too….Given that supply chains rely on a huge number of shipments making their connections with precision, the disruption to the region’s shipping, trucking, and rail infrastructure will have far-reaching effects.”