Skip to content
Home / Half of India’s youth prioritise religion over science, and believe women should always listen to their husbands 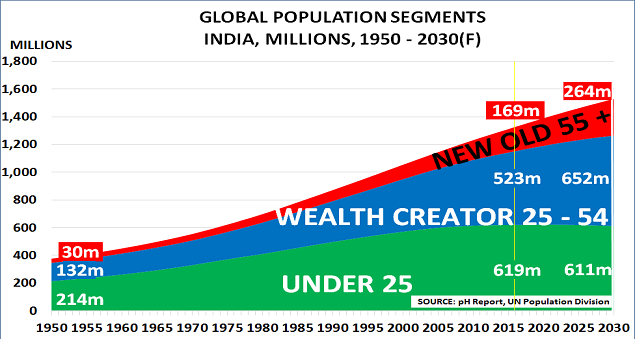 Mention India to many CEOs and investors, and they will smile broadly at the thought of its “demographic dividend”.

Two-thirds of India’s population are under-35,and are already swelling the numbers of those in the critical Wealth Creator 25 – 54 age group which drives economic growth. As the chart shows:

Helpfully, a major new survey by India’s Centre for the Study of Developing Societies provides new evidence on the hopes and values of this vast younger generation. It aims:

“At understanding the social and psychological wellbeing of young people….because if the expectations of this growing mass of youth are not addressed on time, then the disappointments of this burgeoning population could translate into social unrest and even violence.”

Its key findings are critically important:

   One-third of young people are classed as students, up from just 13% during the last survey in 2007.  But many are apparently “studying further to delay entry into the workforce or perhaps as a means of ‘timepass’
   There is also a clear caste divide in terms of access to education, with “42% of Upper Caste youth reporting themselves as students, compared to 25% of Dalit youth and just 16% of Adivasi.”
   “Agriculture is the largest employer of India’s youth” – and 39% of these young people are lowly-paid hired workers
   Unsurprisingly, given this background, nearly 1 in 5 young people are worried about jobs and employment, whilst 1 in 10 worry about inequality and corruption

“We also ascertained the youth’s opinion on contentious issues which have been at the centre stage of the ongoing debate over liberty and progressive beliefs – banning of movies which hurt religious sentiments, beef consumption and death penalty. We find that 60% supported banning movies which hurt religious sentiments. 46% object to allowing beef consumption and 49% support retaining capital punishment. These figures clearly indicate that most youngsters remain averse to progressive beliefs on political issues.”

As the Financial Times notes in its comments on the survey:

“Religion retains a powerful grip. Nearly half give religion precedence over science when they clash, while just a third would privilege science over religion….more than half of youths believe women should always listen to their husbands. Nearly two-fifths feel it is inappropriate for a woman to work after marriage, while a significant 38% feel women should not wear jeans.”

Similarly, 40% of young Indian women “favoured the idea of an obedient wife”

The survey evidence confirms a critical paradox about India:

   Most young Indians have smartphones and are style-conscious
   Yet like most poor people, they are very conservative in their social attitudes, with patriarchy deeply-rooted

It is very easy for non-Indians – seeing television news or making an overnight visit en route to/from China – to simply see the smartphones and fashion, and assume India has now become a middle class society by Western standards. Of course, it does have relatively rich people.  But fundamentally, as Indians all know, it remains a very poor country with average earnings just INR 272/day ($4.20) – and less than two-thirds of adults are literate.

There are vast opportunities in India, once one accepts these key facts. These are often focused on helping people to build a better life for themselves – one example, as premier Modi has highlighted, is in providing toilets for the 600m who currently lack access to them.

Hindustan Unilever has understood this basic truth for many years, and has become India’s largest consumer products company as a result. Their mission statement is simple and powerful – “doing well by doing good“.