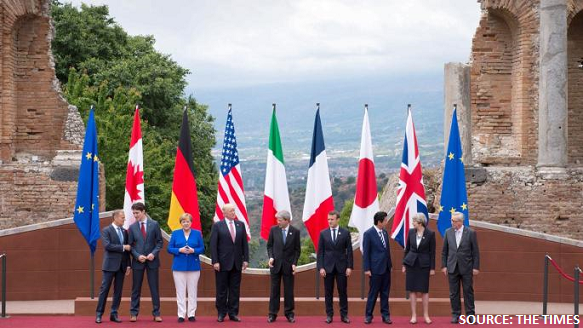 G7 Summits began in the crisis years of the mid-1970s, bringing Western leaders together to tackle the big issues of the day – oil price crises, the Cold War with the Soviet Union and many others.  Then, as stability returned in the 1980s with the BabyBoomer-led economic SuperCycle, they became forward-looking.  The agenda moved to boosting trade and globalisation, supporting the rise of China and India, and the IT revolution.

This weekend’s 43rd Summit in Italy suggested we may be going back to earlier days.  As the picture confirms, the leaders did all meet in the Italian city of Taormina in Sicily.  But they clearly found it difficult to meet the challenge set by their hosts of “Building the Foundations of Renewed Trust”.  One very worrying sign was that both the USA and the UK seem to have become semi-detached from the process. :

□  UK premier Theresa May left early, to “hold urgent talks with her election campaign chiefs” after new polls showed her lead dropping to single figure levels
□  President Trump refused to endorse the Paris Agreement, causing German Chancellor, Angela Merkel, to comment:
“The entire discussion about climate was very difficult, if not to say very dissatisfying. There are no indications whether the United States will stay in the Paris Agreement or not.”

There was some good news, with a compromise seemingly being agreed with US President Trump over his desire to dismantle the world’s open trading system, as the final statement noted:

“We reiterate our commitment to keep our markets open and to fight protectionism, while standing firm against all unfair trade practices. At the same time, we acknowledge trade has not always worked to the benefit of everyone.”

But it was a relatively weak statement, and nothing was said about the President’s withdrawal from the Trans-Pacific Partnership, or his decision to demand a formal review of the North American Free Trade Agreement. The change is even clearer by contrast with last year’s Summit in Japan, when the leaders committed:

“To fight all forms of protectionism ….(and) encourage trade liberalization efforts through regional trade agreements including the Trans-Pacific Partnership, the Japan-EU Economic Partnership Agreement, the Transatlantic Trade and Investment Partnership and the Comprehensive Economic and Trade Agreement.”

Sadly, the same lack of unity had been seen just before the Summit, when President Trump failed to endorse Article 5 (the fundamental principle of the NATO Alliance), which declares that an attack on one member state is an attack on all, and requires a mutual response.  As the Financial Times noted:

“This was particularly galling given that he was attending a memorial for the September 11 terror attacks — the only time Article 5 has been triggered. It remains unclear why he equivocated.”

Even the Summit dinner saw a lack of unity, with US National Economic Council director Gary Cohn suggesting:

“There was a lot of what I would call pushing and prodding.”

This lack of a common purpose amongst Western leaders is deeply worrying.  Of course, they were able to agree on strong words about terrorism and the role of social media.  But their key role is to be pro-active, not reactive.

Collectively, their countries are responsible for nearly two-thirds of the global economy.  Individually, none of them – not even the USA – can hope to successfully tackle today’s challenges.  This was the rationale for the formation of the G7 in 1975, and it has since played a critical role in helping to spread peace and prosperity around the world.

Today’s G7 leaders seem to be in danger of forgetting their core purpose.  They need to re-open their history books and focus on the lesson of the 1930′s, when “beggar-my neighbour” trade policies led directly to World War II.