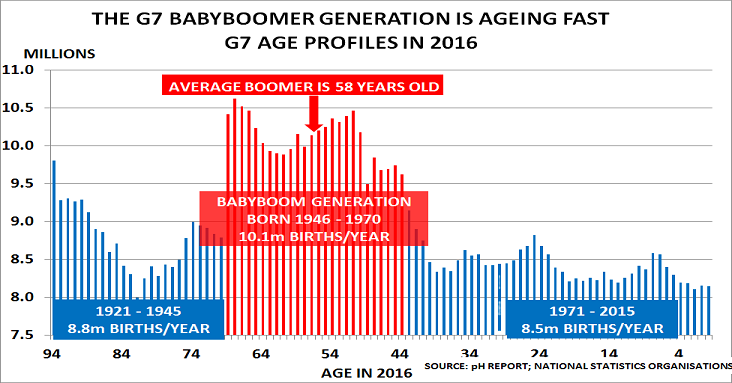 2015 data is now available for births in the G7 countries, responsible for almost 50% of global GDP.  It confirms the picture of a steadily aging population.  This has enormous implications for the economy, as older people already own most of what they need, and their incomes decline as they move into retirement.

The key issue is that these babies were also living in very rich countries (using International Geary-Khamis dollars):

The first sign of the Boomers’ impact came as Western inflation soared in the 1970s, when these babies began to move en masse into adulthood. Most Western countries needed to maintain rationing for long after the War ended, and even the US found it took years to convert factories from making tanks to refrigerators. They would have struggled to meet even normal levels of demand, let alone the surge that developed as a result of the Boomers’ demand. 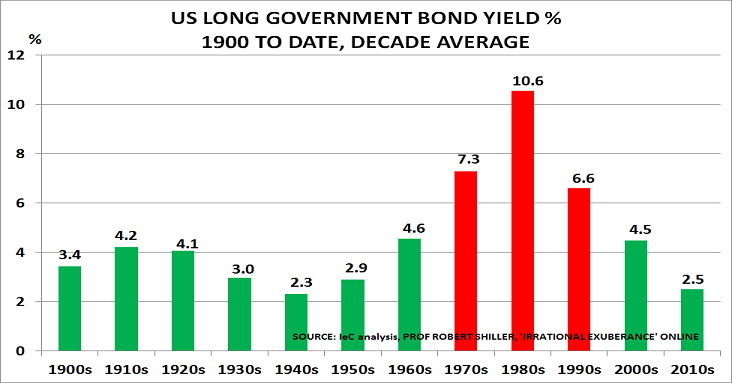 The result was a dramatic spike in interest rates, as the above chart shows.  They jumped by 75% in the 1970s, and more than doubled in the 1980s.

But then the Boomers began to arrive in the Wealth Creator 25-54 group. The average Boomer had joined by 1983. This is the time of life when both supply and demand begin to increase exponentially – as people find jobs, build their careers and often settle down to start families. And the Boomers turbocharged supply and demand, due to the dramatic decline in Western fertility rates from 1970, which dropped below replacement level (2.1 babies/woman).

This meant that women were no longer at home having babies, and were instead gaining Equal Pay and Equal Opportunity at work.  This created the phenomenon of the two-income family for the first time in history.

The rise of the Boomers meant that demand became more or less constant after 1983, as more Boomers joined the Wealth Creator generation every year. By 1993, all the Boomers were in this generation.  In turn, interest rates began to fall back to historical levels – they were down by more than a third in the 1990s, and then fell below the 1960s average again in the 2000s, as the oldest Boomers began to join the New Old 55+ generation.

The Boomers are the largest, and wealthiest, generation that the world has ever seen.  And they also have the longest life expectancy.  This means that – unlike earlier generations – the New Olders are unlikely to die around retirement age, or earlier.  Instead, they can expect to live for 20 years or more:

Common sense tells us that demographics drive demand, and that the benefit of increased life expectancy has a downside in terms of slower economic growth.  But unfortunately, central banks seem to prefer to believe that they can somehow control the economic destiny of the world’s 7.3bn people.

As a result, they have wasted the past 15 years in introducing increasingly futile stimulus programmes – Subprime, Quantitative Easing and the others.  Effectively, by creating all this debt, they have done their best to turn a triumph into a disaster.  But in the end, they will be forced to recognise that they can’t print babies.