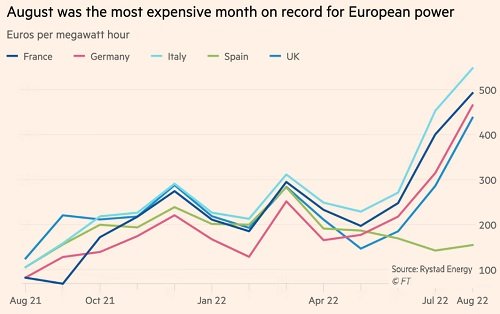 It’s taken more than a decade for reality to dawn. But finally, policymakers have started to realise their computer models don’t work. Instead, they need to look out of the window at the real world as European Central Bank president, Christine Lagarde, noted last month:

“We can no longer rely exclusively on the (inflation) projections provided by our models – they have repeatedly had to be revised upwards over these past two years. There are things that the models don’t capture. Sometimes the unexpected happens. So we have to pay attention to traditional indicators while also monitoring empirical data and what we expect to happen in terms of geopolitics, energy price developments and demographics.”

Unfortunately, we are all paying for their mistake, as the chart showing August prices for European power confirms: 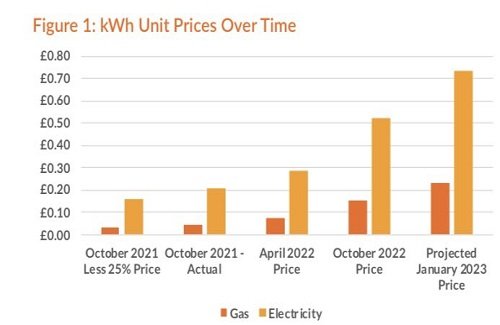 The UK is in a particularly bad position as the government has paid little attention to the problem. Instead, it has been focused on electing a new premier. But the rising cost of power is set to provide a major test for the new leader as the Policy Exchange chart shows:

The UK also faces the problem that it lacks large volumes of gas storage, as the government has naively believed it will always be able to obtain supplies in the market. So recently, civil servants have been forced to make plans for emergency blackouts, should supplies run out in a cold winter. 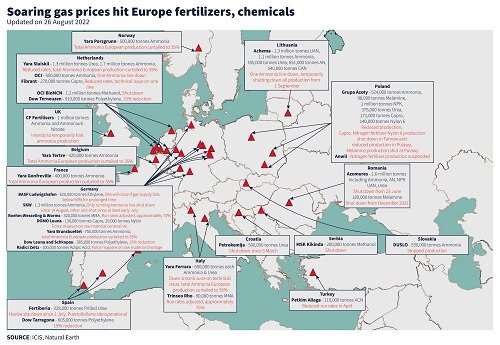 The third chart from I.C.I.S. highlights the major risks now emerging in fertilizer and food markets. As industry body Fertilizers Europe has warned:

“The European fertilizer industry faces an unprecedented crisis with gas prices soaring over 1000% from levels a year ago.

“It is in full-fledged crisis because the European gas market is bust. The record high prices of natural gas, which represent 90% of industry’s variable production costs, makes it impossible for European producers to compete. As a result, over 70% of European production capacity has been curtailed.”

I have been warning here of the problems since April, and they are set to intensify:

“The proportion of household income spent on food is predicted to rise from 20% to 30% over the next year — a 50% increase. And the problem will get even worse in 2024.”

And as the World Bank and IMF have highlighted, there is a growing risk that famine will spread across parts of Africa and Asia.

It’s going to be a very difficult winter. Most of the world will be impacted as Europe bids up energy/food prices to keep its people warm and fed. And it would never have happened if policymakers had recognised the importance of geopolitics, energy markets and demographics.