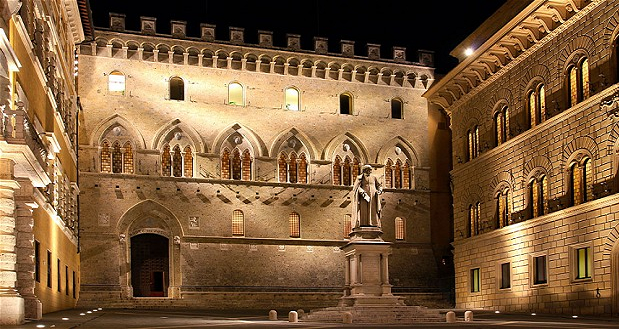 Many of the world’s major investors are assuming that Italy’s banking crisis will force Germany to agree to deliver ‘helicopter money‘ to Eurozone citizens.  Stock markets are rising, and interest rates falling as a result.  But it is a high-risk gamble, which could cause chaos if it goes wrong.  The background is as follows:

The world’s oldest bank, Italy’s Monte dei Paschi di Siena (MPS), is at the centre of a banking crisis which is already reviving memories of 2012′s Eurozone debt crisis over Greece.  But Italy is a G7 member and the world’s 8th largest economy, whereas Greece is at number 47.   And unfortunately, MPS is not the only Italian bank with major problems: 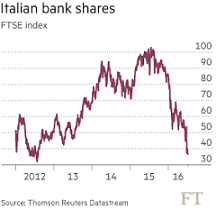 ITALY’S BANKS ARE WAITING FOR A BAILOUT
This share price collapse highlights the core issue.

Italian bankers chose to assume that Mario Draghi, the ECB’s Italian president, could deliver on his 2012 promise to do “whatever it takes” to rescue the Eurozone.  So nothing was done to solve Italy’s bad loan problem – either by forcing through a government-led recapitalisation of the banks (as happened elsewhere in Europe, and in the USA), or by establishing a “bad bank” to hold the loans independently (as happened in Spain and Ireland).

Now, and inevitably, the problems that were swept under the carpet are beginning to emerge again, just at the moment when Italy’s prime minister, Matteo Renzi, is trying to force through major constitutional change:

In addition, new Eurozone banking rules (BRRD) demand that investors lose their money before public funds are used. The aim is to avoid politically unpopular state bailouts of banks taking place. But according to the Financial Times:

“The exposure of retail investors to Italian banks represents a threat to Mr Renzi’s political survival. Between a half and a third of the €60bn of subordinated bonds issued by the banks are in the hands of 60,000 retail investors. They own €5bn of subordinated debt at Monte Paschi alone. Under the new EU banking rules, huge swaths of these investors would lose money — part of the bail-in process — before a single euro of public money could be used to rescue a teetering Italian bank.”

MAJOR INVESTORS BET ON ‘HELICOPTER MONEY’
Nobody knows what will happen next.  But many major investors now assume Germany will effectively double down on its potential €86bn losses from Greece and allow the ECB to launch “helicopter money“.  Named after Milton Friedman and former US Federal Reserve Chairman Ben Bernanke, this would involve the ECB in providing free money to the private sector, hoping to stimulate economic growth and inflation. As a result, financial markets are rallying strongly, assuming that $ trillions of free cash are about to be made available for investment.

But as well-regarded analyst Russell Napier writes, this rosy scenario may seem probable – but may not come true:

“At this stage the best bet must still be that Germany will back away from insisting upon implementation of the BRRD and the bail-in of Italian commercial bank-bond holders and, conceivably, large-scale deposit holders.

“However, the German response to the unilateral announcement by the Government of Italy that public funds would be used to recapitalize their banks, without any bail-ins, was uncompromising. While one might have expected a representative of the European political union to have insisted that laws be implemented, Mrs Merkel intervened directly, presumably representing the Union as a whole when she stated: “We wrote the rules for the credit system, we cannot change them every two years.”

The fact that we have reached this desperate state highlights the complete failure of the stimulus policies pursued since 2008.  Policymakers refuse to accept the obvious truth that ageing populations could not sustain the economic growth seen when they were younger and in their Wealth Creation years.  And so the problems that led to the 2008 financial crisis have not been solved.  Adding more debt to the Ring of Fire is unlikely to prove any more successful.

The risks are therefore rising all the time, as one very senior Italian banker told the Financial Times:

“You think you are kicking the can down the road but suddenly the road turns uphill and the can comes back and hits you in the face.”