One thing that “everyone knows” in China’s Tier 1 cities is that property prices can never go down.  As one resident told the South China Morning Post:

“The only thing I know is that buying property will not turn out to be a loss.  From several thousand yuan a square metre to more than 100,000 yuan. Did it ever fall? Nope.”

He and his wife got divorced in February, in order to buy a 4th apartment in Shanghai for 3.6m yuan (US$530k) on the basis that “ If we don’t buy this apartment, we’ll miss the chance to get rich.”  And as I noted back in September, his view of the market is technically correct:

“It is also easy to forget that housing was all state-owned until 1998, and still is in most rural areas.  Urban housing was built and allocated by the state – and there wasn’t even a word for “mortgage” in the Chinese language.  Not only have home-buyers never lived through a major house price collapse, they have also had few other places to invest their money”.

But whilst bubbles always last longer than anyone expects, in the end they have to burst.  Today, for example, unremarkable pieces of land in Shanghai are being sold at $2000/sq foot ($21500k/sq metre), nearly 3 times the average land price in Manhattan, New York. 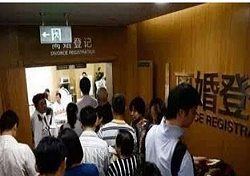 And one sure sign that the bubble is ending, comes from the fact that “everyone” is now getting divorced in order to buy those 2 extra apartments – which will make them rich, as the Weibo picture shows.

Everyone has realised that a divorced couple can buy an extra 2 apartments with only a 30% deposit – and benefit from zero property tax.  As a result, prices have risen 30% so far this year in the Tier 1 cities.  Even more remarkably, prices for undeveloped land are higher than for existing apartments on neighbouring plots.

And mortgages, which only began to exist in the past 20 years, accounted for 71% of all new loans in July/August this year, compared to just 23% of new loans in 2014.

The bubble also highlights the growing split between President Xi and Premier Li over the future of stimulus policies.  As China Business Review notes:

“While the State Council has always controlled economic policy, Xi has been gradually taking economic matters into his own hands since the State Council’s failures following the stock market crisis last summer. Li was noticeably absent from the Economic Situation Expert Seminar hosted by Xi in Beijing July 8, and was also sidelined at the Beidaihe Conference in August. Xi’s rejection of Li‘s stimulus approach further explains the torrent of measures issued in early October to limit housing purchases and curb overheating in the economy….

“Since August, it is increasingly common to see corruption cases featuring real estate conglomerates like Vanke and Dalian Wanda publicized…. it appears the anti-corruption campaign is being extended to deal with the housing bubble crisis.”

China’s stimulus policies since 2008 mean that it now has $25tn of debt in an $11tn economy.  And as Deutsche Bank’s chart above shows:

  It now takes $450bn of debt to create 1% of GDP growth in China (even using the “official” overstated GDP figures)
  Back at the height of the US subprime bubble, it took $350bn of debt to generate 1% of GDP growth in 2007
  China’s wealthiest man, Wang Jianlin, said recently that China’s real estate market is “the biggest bubble in history”
  He warned that prices are falling “in thousands of small cities”, even whilst they still rise in the large cities

Another worrying feature is that much of the financing for the bubble has been done in the shadow banking sector, via Wealth Management Products.  As US financial magazine Barron’s warned at the weekend:

“These WMPs are starkly reminiscent of the bad mortgage-backed paper in the U.S. that metastasized in 2008 into a full-blown global credit crisis.”

So here’s the question.  Would you, if you were Chinese and married, get divorced today in order to buy new apartments?  Or would you have already got divorced, and be sitting back waiting for prices to rise ever higher?  Or would you be shaking your head in wonder, and fearing that “this will not end well?”