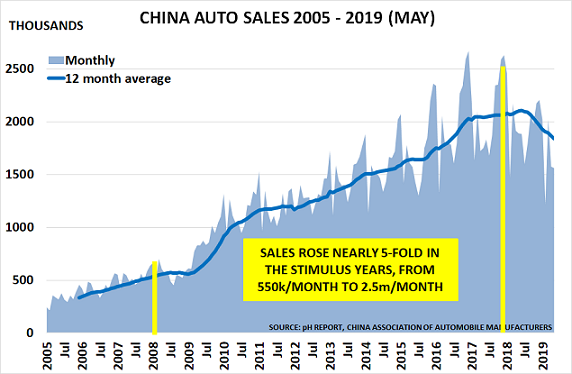 Trade wars, Dieselgate and recession risk are having a major impact on the European auto industry, as I describe in my new video interview with ICIS Chemical Business deputy editor, Will Beacham.

One key pressure point is created by the downturn in China’s auto industry. As the chart shows, it has been a fabulous growth market in recent years due to China’s stimulus policies, with sales growing nearly five-fold from 550k/month in 2008 to a peak of 2.5m/month last year. And German car exports did incredibly well as a result, due to their strong reputation amongst consumers.

But the start of the US/China trade war last year – plus the $2tn taken out of China’s speculative shadow banking sector over the past 2 years by the government’s deleveraging campaign – means sales have been in decline for almost a year. 2018 saw the first downturn in the market since 1992, and since then the pace of decline has been accelerating with May volumes down 17%. 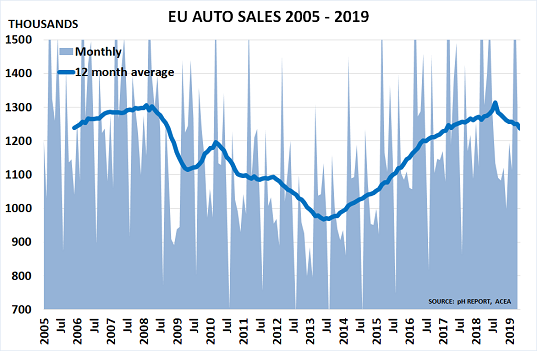 European car sales have also been falling since September as the second chart confirms. And unfortunately, the industry is confronted by a near-perfect storm of problems, which make it likely that the current downward trend will continue and probably accelerate.

The most immediate issue is the slowdown in the EU economy, with consumers becoming nervous about making high-ticket car purchases. Added to this, of course, are concerns over Brexit – which led sales in the UK (the 2nd largest market) to hit a 6-year low in the normally buoyant sales month of March, 14.5% below the 2017 level.

And then, of course, there are concerns over China’s slowdown, particularly for Germany’s export-oriented manufacturers such as BMW, Audi, Mercedes and Porsche – plus rising concerns over the potential for a European trade war with the USA.

But the real concern arises from the continuing fall-out from Dieselgate, which led diesel’s share of the EU market to fall by 18% in 2018 versus 2017 to 5.59m. Diesel cars accounted for only 35% of EU auto sales, the lowest level since 2001. And in turn this is wrecking the industry’s plans for meeting the new EU rules on CO2 emissions, which VW estimates has already cost it around €30bn, at a time when all the carmakers are also having to invest heavily in EV technology.

“For the first year since 2009, petrol cars constituted the majority of new registrations in 2017 (53 %). New diesel cars, which were on average around 300kg heavier than new petrol cars, emitted on average 117.9g CO2/km, which is 3.7g CO2/km less than the average petrol car. The average fuel efficiency of new petrol cars has been constant in 2016 and 2017, whereas the fuel-efficiency of new diesel cars has worsened compared to 2016 (116.8 g CO2/km). If similar petrol and diesel segments are compared, new conventional petrol cars emitted 10%-40% more than new conventional diesel cars.”

Manufacturers have no easy options. They can, of course, aim to accelerate Electric Vehicle (EV) sales in order to gain “super-credits” towards the new limits. But EVs are currently less than 2% of the EU market, so the scope for a major ramp-up in volume is very limited, and their profit margins are much lower due to the battery cost. UBS therefore suggest that automakers earnings per share will be badly hit, with PSA down 25%, VW down 13%, Renault down 10%, Daimler down 9% and BMW down 7%.

The saga highlights how the diesel makers’ decision to cheat on reported emission levels in order to maximise short-term profit has led to major long-term damage for many manufacturers. FCA’s need to enter a “pooling arrangement“ with Tesla to reduce its potential fines, and to exit sales of its most heavily polluting models, highlights the scale of the problems.

In turn, as I discuss, this is all very bad news for major suppliers to the auto industry such as the petrochemical sector.  Please click here if you would like to see the full interview.